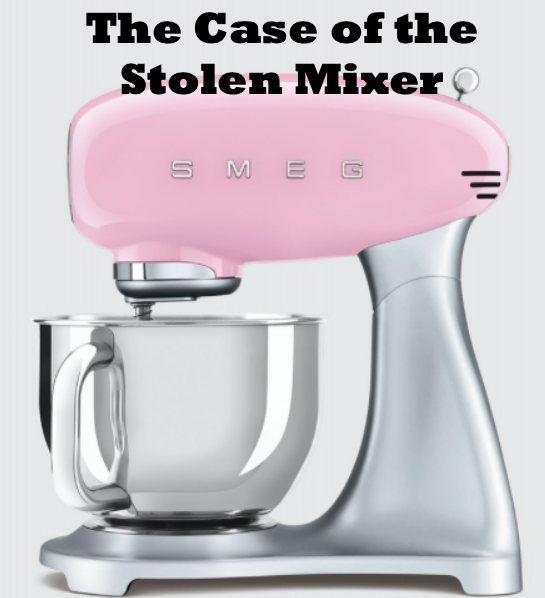 I know my mother-in-law stole one of my wedding presents and I’m about to lose it. She volunteered to take the gifts people left at our wedding home with her for my husband and I to open we when got back from our honeymoon.

Two weeks later we’re at her house to pick up the gifts and everything is fine except I noticed that sitting on her kitchen counter is a pink SMEG stand mixer. It is the exact same $500 mixer that I had registered for at Williams and Sonoma

I asked if that was one of our wedding gifts and my mother-in-law quickly said no and went on to explain that she liked the mixer I registered for so much she got one of her own.

I didn’t ask any more questions, but my MIL can be pretty shady, so I checked my gift registry and discovered that one of my dad’s business partners and his wife bought me that mixer. Then I asked my mom to find out if they brought the gift and left it on the gift table at the wedding. Not only did they leave it on the gift table but the couple helped my mother-in-law carry the gifts out to her car at the end of the wedding. So they actually saw their present, the mixer, in my MIL’s car.

At this point I’m 100% certain that’s my $500 mixer sitting in my mother-in-law’s kitchen. How do you suggest I go about getting it back without calling my mother-in-law a thief?

First you need to ask yourself what’s more important: the mixer or your relationship with your mother-in-law and family harmony? Because if you go deep on the mixer and mention the words “stolen” or “robbed” with her chances are it’s going to be known in family lore for years to come as Mixergate.

That said, for this to work out I think you need to give your MIL plenty of room to come out as less of a thief and more as a woman who got her mixers confused. I would gently approach her and say you need her help because your gift registry shows that family friends bought you that mixer and your mother confirmed that at the end of the wedding these friends said they carried the mixer and placed it in your MIL’s car.

Then I would segue into a fib and say that you even have the serial number for the mixer they purchased, and you checked and yikes it matches this mixer. I would then quickly propose that maybe she’s got your wedding gift on her counter and the mixer she got is in a box somewhere.

It’s all a bunch of BS but it does give your mother-in-law a chance to save face and to tell you that, “Yes, that’s probably what happened.” It also lets your MIL know that you know she took your mixer but you’re going to pretend this is how it went down.

After that I suggest you smile, pick up the mixer and flee to your car and never mention this incident again.

😳 Desperate for some advice? In a sticky situation? 😱 Dear Snarky is here for you at snarkyinthesuburbs@gmail.com.

📚 But wait there’s more . . . 🎧I I’ve got two new audiobooks out and this time of year I suggest you check out Snarky in the Suburbs Back-to-School.🚌 It’s a wild romp through PTA drama, mom meanies, a heaping helping of revenge and a fall festival that goes rogue. 🤯 Click on the link and take a listen.