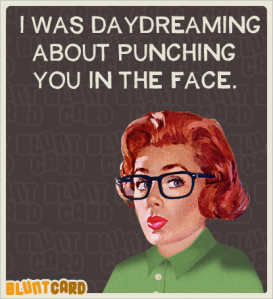 When a trip to Walmart results in deep thoughts about face creams and “jowl alerts.”

I am not a grandma. It’s important for me to say this because I just got an ego beat down at Walmart. Could I be a grandma? Sure. Could I be a grandmother to a 22-year-old? Yes, I mean biologically speaking, I guess I could be, but a lot of tumultuous twists and turns would have had to happen for that to take place. And for the record, Walmart should be a safe space concerning your appearance. You should be able to walk into any Walmart and as long as you’ve got on a bra you’re Miss America.

Imagine my shock when I was standing in a Walmart check-out line with some plastic hangers chatting up the woman behind me about moving kids into dorm rooms and seeing kids graduate college. You know, the whole cycle of life thing and then being asked, with a straight face if the 22-year-old “child” I had mentioned was my grandson.

This caught me so off guard I was, at first, rendered speechless. My immediate thought was, “Oh no, she didn’t.” I responded with a smile that I hoped conveyed that I thought she was mentally unbalanced for asking that question and responded with, “No, the 22-year-old is my oldest CHILD.”

This cretin, who looked to be in her late 30s, didn’t even seem embarrassed or even attempt to back pedal (and I wanted to see some first-rate backpedaling). She just shrugged her shoulders and crooned, “Oh, I would have thought grandmother.”

By this time, I was clutching my Walmart Mainstay 18 pack of plastic hangers with all my might because if I let go someone was going down. I channeled my mother, smiled back at her again and said, “Well, aren’t you sweet,” which is southern for “insert four letter word here” and then “you.”

Once I checked out I held my apparently very aged head high and did my best swagger walk out of Walmart. Unfortunately, I had hurt my knee a couple of days ago so it was more of a swagger stumble. At best, it was a Captain Hook – inspired peg leg pirate swagger. But, I still owned it. No one was going to age shame me and think I minded in the least.

When I got to my car I immediately did a thorough inspection of my face in the most unforgiving mirror known to man –   a rearview mirror on a sunny day – and concluded that perhaps it was time to do what I had been tenaciously avoiding. Yep, I had to admit that I needed to up my game and so I ventured to where no woman in the deep throes of advanced middle age wants to go – the department store makeup counter.

It’s not that I don’t like makeup or face creams. It’s just that I hate that the new sales tactic seems to be pointing out your flaws. One time I was told that I needed to be on “jowl alert.” Not just any jowl alert, mind you, but a “Defcon 2.” Ouch.

Excuse me, that the only sunscreen in my childhood was Hawaiian Tropic Dark Tanning Oil. No one had ever heard of SPF’s. If you had asked me what an SPF was back in the day I would have looked up from drinking a TAB while reading “Young Miss” magazine and responded with a “I dunno.”

What happened to wooing the customer? I want to be told that I look amazing and with just a little dollop on of this and that I would be beyond stunning. Instead, I have to give myself a pep talk before I darken the Lancôme counter at Macy’s.

Hey, wait a minute. I think I’ve figured this whole “grandma” thing out. That lady at Walmart must work at a cosmetic counter. Come to think of it, she did have on a lot of eye shadow. Maybe her whole “grandma” statement was more of a sales pitch and less of an overview on my face.

That must be it and even if it’s not – that’s the story I’m going to go with.