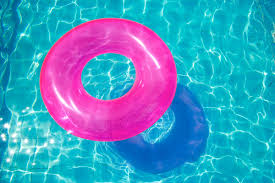 er is a time of year that you don’t usually associate the word mysterious with. It’s sunny and bright and just way too hot for anything that involves effort filled intrigue. But, there are some summer mysteries lurking under that cloak of perennial sunshine. Mysteries that I’ve tried for years to decipher with zero luck and I’m now thinking as classifying as unsolvable. To be sure my mysteries aren’t on the same level as where the aliens are stored in Area 51, but they are, nevertheless, still baffling.

Why is that the more expensive the summer eye-wear the better chance it means that they will vanish into thin air? Sunglasses and swim goggles disappear at an alarming rate during the summer and if you paid more than the going rate at Target for said items they will become lost in a matter of a days.

Last year, I shelled out some big bucks for premium swim goggles and three days later they were gone. It was like they dematerialized. Meanwhile, the goggles I paid probably five bucks for more than a decade ago have survived two moves across the country (and many vacations) and can always be found in the bottom of the swim bag. These goggles must be telepathic. They always find me. I’ve even, on purpose, left them at the pool multiple times because they fog up horribly and there’s always someone running after me shouting, “Hey, you forgot your goggles.”

The scenario is the same with sunglasses. Some white snazzy sunglasses I got at a party super store for 99 cents as part of a goodie bag for my daughter’s swim party eight years ago I also still own. Meanwhile, the one and only time I upgraded to Ray Ban’s they vanished into thin air before the week was out.

Of course, the moral to the mystery is don’t buy sunglasses or goggles that cost more than $10, but still I crave the knowledge about why this happens. There has to be an explanation.

Why is that no matter how much sunscreen you apply some part of your body always gets burned? I consider myself a sunscreen ambassador. I believe in sunscreen like I believe in the healing properties of chocolate and a “Real Housewives” marathon. Yet, I’m always getting a random burn and to further the mystery it’s always a bizarre shaped patch like I’ve gotten branded with solar blazed hieroglyphics. If I think about it too much it’s like some unseen force is tattooing me. (Maybe it’s those Area 51 aliens?)

This is a personal mystery that might not apply to the amazingly coordinated, but why is it so hard to gracefully get on a pool float? One would think you would just plop and drop on a float with nary a moment of embarrassment. Yet, in my reality getting on a pool float is like trying to saddle up a greased pig.

I know the prodigious amounts of sunscreen I use are to partially blame for the slipping and sliding, but there has to be some other explanation for why I, along with millions of other pool float challenged people, have long-term summer self-esteem issues related to conquering a float. One of my children took a video of me trying to get on a raft and to this day it might be the single most embarrassing thing I have ever witnessed. If you play it in fast motion it looks like the raft is trying to kill me. Again, could it be an assassination attempt, by, um-hum, that’s right – aliens?

One thought on “Summer Mysteries”