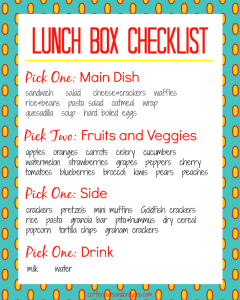 I have packed my very last school lunch. In fact, I estimate that I have Glad Ziplocked more than 6,916 meals for my kids to take to school. If that number looks high to you please be advised that not once, as in never ever, in both of my children’s K-12 experience did they buy lunch at school.

Of all the parenting journeys, I’ve had I can say with one hundred percent certainty that, nothing was more fraught with peril or open to scrutiny and judgement than what you put in your child’s lunchbox. When my son started school in 2002 the lunch as a bellwether of your parenting style hadn’t yet begun. You could still throw a nacho cheese Lunchable in an insulated Thomas the Tank Engine bag and call it a day.

By the time he started second grade if you sent your kid to school with a Lunchable you might as well have also included a cartoon of unfiltered Marlboro’s and a flask because the reaction from the mom squad would be exactly the same – abject horror, followed by a shunning.

When my son reached fourth grade the Smucker’s Uncrustable was still okay, but just a year later it the white bread PB&J cut into the shape of a circle was a satanic sign that whomever packed the lunch was an evil slacker lacking in education about the demonic nature of bleached flour.

All of this was minor league, a real amateur hour, when compared to my daughter starting school four years later. In second grade her elementary school began a “Lunch Nazi” program. Okay, it wasn’t technically called that, but some really “helpful and caring moms” started a nutrition committee and began volunteering during lunch and writing disparaging notes to parents whose children’s lunchboxes they found lacking in both fresh fruits, vegetables and low sodium choices.

This lasted for about a week until a mom organized a counter attack and left a note on the school marquee that one of the “lunch note” mom’s husbands was having an affair. That was the end of school notes written by non-school personnel for quite a while.

When my youngest hit third grade lunch had become a political statement. (Full disclosure she was attending a school on the West Coast.) If you weren’t packing a fair trade, non-GMO and organic lunch for your child than you were a hater who didn’t care about Mother Earth.

Fast forward to a year later and it’s no longer about the family origin of the carrot sticks in the snack size Ziploc instead lunches had transcended into works of art. Moms were packing “masterpieces” in Bento boxes. Sandwiches that looked like hedgehogs, fruit and cheese that resembled Cinderella’s castle and one kid actually had a mini charcuterie board. It was not a good year for a mom with a picky kid that only liked, yep, Smuckers Uncrustables with a Capri Sun chaser. Let the public flogging begin.

That was also the same year parents began the practice of sending kids on playdates with their own snacks and it wasn’t due to any food allergies. It was because, as one mother explained to me, “fear of food that hadn’t been vetted by the child’s parent.”

By the time middle school rolled around it was no longer about the food, but who packed it. Alerting other parents that your child makes his own lunch became a sign that you were raising a superior kid with, of course, superior parents. So, if anyone reading this was about to send me an email about how your children have been packing their own lunch since their seventh birthday – don’t.

Today I welcome the sweet freedom of being done with packing school lunches. In fact, I think I’ll celebrate with a Nacho Cheese Lunchable. Cheers!