My cousin is driving my entire family crazy. Her new thing is to tell everyone about how bad TV is and to constantly point out that her family doesn’t even own a TV because she’s raising “better citizens of the world.”

It wouldn’t be so bad if she didn’t come to family get togethers when we’re watching awards shows or  football and  constantly bitch about TV. She even posts on social media about the evils of owning a television. 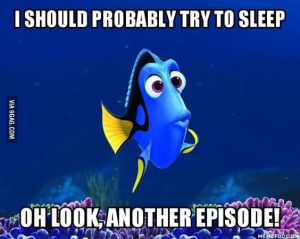 I need something that will make her stop so she doesn’t ruin the Superbowl and the Oscars. Can you help?

The easiest thing to do would be to simply not invite her. Why haven’t you thought of that? Don’t be afraid to say, “We didn’t think you would be interested because there would be a TV on and we know how that’s a trigger for your non medicated issues.” (Okay, that maybe a little mean so feel free to sweeten that sentence up.)

My guess though is that you cousin is a fraud. If she’s posting on social media with her smart phone than she’s probably also watching an assortment of yummy television shows on her phone, on her tablet, on her laptop, desktop or all of the above.

So, the next time your cousin gets on her high horse inform her that a screen is screen. It doesn’t matter if its 52 inches or 5. The American Academy of Pediatrics says in terms of viewing time it all counts the same. This means unless your cousin is ready to go completely screen free she needs to change the channel to shut up.

If you have a question for Dear Snarky “21st Century Advice With An Attitude” email at snarkyinthesuburbs@gmail.com or private message me on my Snarky Facebook page.