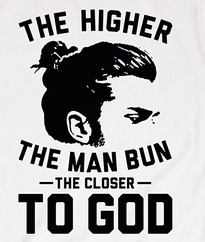 My husband has moved out of our house and is currently living with his mom because I called B.S. on his mid-life crisis.  About six months ago he started growing his hair out, which didn’t bother me that much, but then when it got long enough he began wearing a man bun.  He looked like an idiot and even our kids were embarrassed by it. I begged him to get rid of it, but he just would laugh and say it was “cool.”

Last week, I took matters into my own hands and while he was sleeping I got my sewing shears and cut his man bun off. I knew he would be angry for a little bit, but what I didn’t think would happen is that he would go live with his mom over it!

Do I apologize again or just let him have his temper tantrum and enjoy our man bun free home?

Honestly, my first reaction was to applaud your efforts in helping to create a man bun free America. BUT just wow on doing a man bun-ectomy on your hubs while he’s sound asleep. I think you crossed a line there.

As for your husband taking it way over the top and moving home to mommy well, apparently, the man bun represented more to your spouse than a hipster hair style, perhaps it meant youth and vitality to him. Who knows? The whole thing is very Old Testament Sampson and Delilah to me. Your husband is acting as if you cut off a hunk of manhood rather than just man bun.

But you two need to repair this rift ASAP. I’m pretty sure there isn’t man bun marriage counseling (yet), but that doesn’t mean you and your spouse don’t need professional help. Trust me there’s a lot more going on here than a haircut or a hair do.

If you have a question for Dear Snarky “21st Century Advice With an Attitude” email me at snarkyinthesuburbs@gmail.com or private message me on my Snarky Facebook Page.