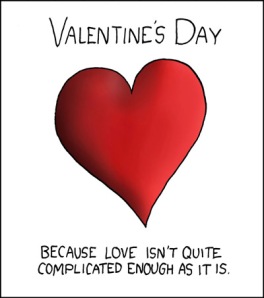 As females we are all raised on the myth of romance. As we grew from girls into young woman we all went in search of the intangible feeling of excitement and ardor that romance promised. As a middle-aged married woman I here to sing the praises of the unromantic marriage.

Now, just because I believe romance is a transitory relationship affliction doesn’t mean I don’t believe in love. Love trumps romance. Although, I have found that many a marriage has been thrown into the divorce dumpster because one or both parties were seeking more romance in their lives. This is a mistake.

I’m here to tell you that some of the best and most durable marriages are built not on romance, but on something as dull as common sense. So, for all of you who are currently reading this and feeling very sorry for me while your spouse simultaneously feeds you grapes as he massages your feet with rose petals – don’t. Let me show you how unromance is the way to go as I myth bust five romantic gestures.

Basically, a grand display of affection equals a cry for help. I’ll use my neighbors the “Sexy Showoffs” to illustrate this point.  This is a couple in search of a “Real Housewives” casting call. These two are all about the spotlight.

Every anniversary, every birthday the husband sends his wife on a scavenger hunt around the neighborhood to find clues where to locate her present.  This means that almost every neighbor is caught up in the drama of the gift hunt. It starts about a week before the birthday and anniversary with the husband coming over to see if he can leave a hint at your house on such and such date and time for the scavenger hunt.

When we first moved here I said yes to both b’day and anniversary. (Now, I decline to participate in this one-act play without full actor equity wages.) The wife, in a costume, the husband has selected for her to wear, (Can you believe it?) that is in some way a tip about her “big” gift, comes frolicking (most often breathlessly) from door to door collecting clues in the form of little gifts and then ta-da finally locates her mega present. By this time a large portion of the neighborhood is following the wife to see what her grand and glorious husband has surprised her with this time.

Last year it was a car for her birthday and a cruise for their anniversary. Almost every female neighbor, after this shameless bid for attention, always sighs and comments on what a romantic husband Mr. Sexy Showoff is. I roll my eyes while my evil mind tries to figure out what kind of unique hell is going on inside their house to make a couple in their 40’s take to creating a spectacle of themselves twice a year.

For the love of God, the wife was wearing a grass skirt and a coconut bar when she went clue hopping for that cruise.  Let’s just say her coconut bra was not sufficiently adequate to cover her more than ample pair of ripe tropical fruits.  This old enough to know better mom was flashing the neighbors her nipples the whole time.

Romantic? No. A couple in need of counseling? Yes and just maybe forcing your wife outside in winter in a fruit bra and grass skirt constitutes some form of spousal abuse.  I’m thinking at the very least pain and suffering.

Besides it in no way can compete with the birthday and anniversary celebrations of the unromantic couple.  How can a cruise or a car even begin to rival, say, the gift of a new roof?

What’s more romantic than protecting your family? In fact, a new roof is the gift that keeps on giving and it’s so special that it qualifies as not only a birthday gift, but Merry Christmas and Happy Anniversary all rolled into one.

Who hasn’t gotten their heart racing and all a tingle from what I call the trio present. I know when my husband tells me that the new plumbing costs so much that it’s going to be both of ours birthdaychristmasversary gifts I feel so special and blessed. Every time I flush the toilet I imagine I can hear it say, “I love you.”

Whoever thought of this needs to be immersed in movie theatre “butter,” rolled in Milk Duds and then used as a Swiffer to clean the theater’s floors. What a crock! Like a mom’s to do list isn’t long enough now we have to add date night to it.

That’s all I need is the added pressure of finding a babysitter for a Friday or Saturday night. (Okay so my son is old enough to watch his little sister, but hey I remember the thrill of the hunt in finding a sitter all of your kids liked and that didn’t cost as much as getting my hair highlighted.)

Now add in the effort and time of getting myself all gussied up. Factor in the expense of a dinner and movie and the stupidity of making charming “non kid or work related” small talk with my husband. Eww.

Here’s what I’m interested in – Alone Night. The husband takes the kids to the movies. I get to go upstairs, get in my p.j.’s, get in bed, pour myself a little vodka and eat Reece Peanut Butter Cups while watching a chick flick. That’s romance. Why? Because your husband took one for the team by taking the kids and leaving you blissfully alone in a quiet house.  Now, you maybe saying how can being alone be romantic? But, you see I’m not alone .I have chocolate.

The Hands On Honey

Everyone repeat after me: Just because a couple is all touchy feeling does not a good marriage make. I have known many a marriage plagued by obsessive P.D.A. I’ll even admit to being a little jealous of one couple where the husband was besotted with his wife.

His hands were always all over her. Patting, rubbing, nuzzling. It was as if he was looking for buried treasure. If my husband was handling me that much in public I would think he had, a) temporarily lost his vision and was working on honing his other 4 senses or b) he was patting me down in an attempt to find his phone.

In an unromantic marriage you never need to worry about your husband trying to get to 2nd base at your Supper Club. He knows that if he thinks about reaching across the back of your dining room chair to massage your back fat in public you’ll step on his foot and make him help with the after party clean up. The tactile expression any unromantic wife really cherishes is a man’s ability to fondle a dishwasher. Psst, for all your romantics out there that means unload and load a dishwasher.

Just because a couple has been married a long time doesn’t impress me nor do I necessarily find it romantic. Who doesn’t know the couple married for 30 year where maybe 3 years were happy ones. Congratulations on not having the balls to get a divorce.

I don’t think you’re a quitter if you get a divorce. In a lot of cases I think it takes guts to give up on a marriage. You’re walking away from a life you thought you wanted and going out into the unknown. That’s takes a certain degree of courage which I feel is immensely braver than parading your coupledom around like your living the romance for the ages when in reality your marriage is a crapfest. At my wedding, many years ago, one of my mother’s friend came up to me and said, “I wish you as much happiness in your marriage as mine has brought me.”

We Are Lovers Not Roommates

Case in point when you bring that new baby home from the hospital you don’t need a Lance Romance you need a roommate. Someone to help you handle the exhaustion, the chores and the care-taking of the brand new human.

When my kids were babies my most favorite sound wasn’t their cooing, but the clatter of the garage door opening every evening. It meant my husband was home from work. Yahoo, the calvary had arrived and I could hand off the baby and take a shower or a nap or just hide out for 30 minutes.

Now, imagine if during this critical time your marriage was lover based instead of roommate focused. Your husband would come home from work ready to sweep you off your feet and take you into bed for a frisky romp.

That would mean you would have to get all pretty and by that I mean shave your legs or at the very least put on deodorant. Then you’d have to make sure your infant was asleep and not ready for another turn at the all you can eat boob buffet – good luck with that.

Sure you want to hit the sack but you want to do it alone because the only thing you’re desperately yearning for is sleep.

Let us all now have a moment to rejoice and take pride in the unromantic marriage. A marriage built not on roses and passionate declarations of affection but on the ability to withstand the aggravation of a toilet seat being perennially left up. That, my friends, is a marriage built to stand the test of time.