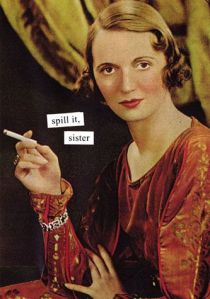 A new family has moved into our neighborhood. One of the kid’s is in my daughter’s class. I met her mother and she seemed really nice. The problem is there’s a mom at the school who tricks  other parents into watching her kids.

It goes something like this: The mom suggests you start a carpool. You agree. Then before you know it you’re doing all the driving and the mom starts sending you texts asking if her kids can go home with you and she’ll pick them later and by later it turns out she means like way after dinner.

I saw this mom being really nice to the new mom and I knew what was up. She was going to start using the new mom as her latest free childcare.

I, being a really nice person, decided to warn the new mom about this woman. The new mom then told the other mom about what I said and now they’re both saying means things about me.

I’m really angry because all I did was give the new mom a head’s up, which by the way I wish someone had done for me, and now I’m the horrible mom. It’s really pissing me off.

Is there any way I can turn this around? It’s getting to me. I’m not going to lie the Valentine’s Day party at school was rough.

Signed, Just trying to help out

File this under no good deed goes unpunished and mind your own business. The problem here is that while trying to do what you thought was a kind thing (and I’m hoping that was your motivation) with your heads up to the new mom you entered into unknown territory.

And by that, I mean you didn’t know the new mom well enough to judge how she would handle what you told her. Some mothers, for example – me, would be most appreciative of being told a little inside info. Other mothers are going to think that what you shared was mean spirited and perhaps gossipy. And there’s the third unknown that maybe this new mom is a pot stirrer and she’s going make her mark by really living large on what you shared.

I think we all know which way this turned out. That said, there is really nothing you can do. I would ignore it. Keep your mouth firmly shut. To say anything else is just going to extend the life span of this drama.

I enthusiastically suggest in the future you need to be a little more circumspect about what you share with strangers and yes, this woman was essentially a stranger. What did you really know about her besides the fact that your kids attend the same school?

Also, you can take some satisfaction from knowing that the new mom will most likely become the de facto childcare are provider for this woman. When this happens fight the urge to say, “I told you so.”