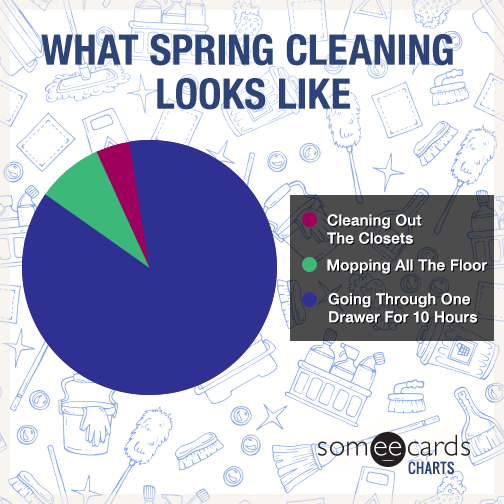 It’s spring. I would say “yay spring” but all this means is that we’re in for some very special mood swings from Mother Nature. You know the drill – ski jackets one day and shorts the next.

I’m actually okay with the mercurial nature of spring because it keeps you guessing. This beats the sweltering slog of summer when the only thing that changes is my quest to find a better deodorant.

Spring does have a lot going for it. My personal favorite is spring cleaning. The season shames you into a dirt smackdown. Have you ever noticed how the sun shining into your house on spring morning is like a NASA telescope? You see dirt, dust and other assorted crud that you’ve never noticed before.

It’s frightening. Just the other day the sun shone on my stainless-steel refrigerator door and it looked like someone had stuck their hands in jelly and fingerpainted the frig. It turned me right off my morning smoothie. In fact, I had to put it down and grab cleaning supplies.

Then there’s your floors. Holy scrub-a-dub-dub that spring sun shows all the crevices you missed or turned a blind eye to all winter. You know what I’m talking about – the minuscule crumbs that get jammed in between the floor and baseboard. I was late to a Zoom meeting because I emotionally felt I couldn’t go on with my life until I got a toothbrush and laid down on the floor so I could exact my revenge on the crumb convention.

Another part of spring cleaning that I enjoy is what my husband calls “the festival of tossing his belongings.” I do relish a good closet cleaning and I’d like to go on record saying there have been only a very few instances where I’ve inadvertently donated something he later confessed a great love for.

The reason I’ve had to engage in closet coups over the years is because if I didn’t our closet would still be stuffed with my husband’s 28-inch waist pants that were last worn in 1994. Unfortunately my seasonal “tidy ups” have manifested into a lost and found syndrome for my husband. This means that any time he can’t find something instead of actually looking for it he accuses me of “donating it.”

I will come clean that I did donate some stereo equipment that had been sitting in our basement for more than a decade to Goodwill. How did I know it was “vintage” and that vinyl records would have a hipster rebirth? Both my son (hipster 2.0) and husband (the original hipster) freaked out to such an extent that I went to three Goodwill stores looking for it.

To this day my defense is that if the stereo stuff was that precious shouldn’t it have been, oh I don’t know, at the very least bubbled wrapped instead of sitting on top of a storage bin labeled ski clothes?

One would think that the case of the hysterical hipsters would have turned me off doing any more epic spring purges, but you’d  be wrong. The way I see it, once you’ve turned a blind eye to clutter you’re taking a giant step towards a linen closet whose door won’t close and a basement that reeks of “I’ll deal with that later.”

Spring is the season of rebirth and I don’t think it’s out of line to want to welcome it with some space in the basement? When I told my husband this, he just shook his head and muttered, “There’s goes more of my stuff.”