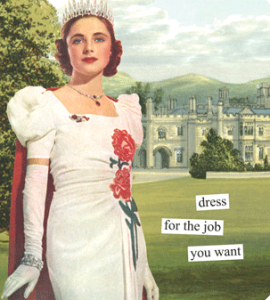 Family drama is fascinating especially when it’s not your family having all the drama. This is why I’ve been keenly interested in the whole Meghan Markle/Prince Harry saga. It’s like a “Real Housewives” reunion show without the hair pulling and of course, a whole lot more money, historical ramifications, one-of-a-kind tiaras and real estate.

I feel uniquely qualified to comment on this whole hullabaloo because I’ve been a loyal reader of Majesty Magazine “the quality royal publication” since the age of 11, got up super early to watch Princess Di’s wedding while eating scones (overrated biscuits in my opinion), and most importantly Princess Di and I were born the same year.

When she got married at the, I would say, too young age of 20 I felt for her – keenly. What was she doing? Her betrothed could not in any realm be classified as a dashing prince. To me Prince Charles exuded all the charm of a cold cafeteria fish stick that you got stuck with because you were last in the middle school lunch line.

There is no question that Charles is loaded and has access to multiple castle like dwellings but still a young woman of 20 yearns for more. 20-year-olds still dream of romance and swooning passions. Not getting married to a man/prince who upon being asked in an engagement interview if he’s in love dourly utters, “Whatever love means.”

Hindsight being what it is she should have ditched him then and there. Who marries a guy that is too lazy to even pretend that he has, at the very least, a fondness for his bride? But alas, they got married and we all sadly know how that ended.

Now fast forward to this month’s royal shake up and I find myself confused and perchance a little impressed. My confusion comes from the fact that Meghan and Harry, a couple creeping up on 40, and with Meghan having a previous marriage under her Hermès belt, were both so seemingly naïve about family dynamics. No one just gets married and presto fits into their new family. It can be an eternal struggle.

I still have the psychological battle wounds from December of 1998 when my husband and I told my in-laws that we would not be spending Christmas morning with them. It was rough and emotional. And I, not being the blood family member, was blamed for the decision and was accused of “ruining Christmas.”

The histrionics were impressive, and my in-laws seemed to conveniently forget that we were already spending Christmas Eve with them. Meanwhile, my dad was beyond ticked off that I had to see my husband’s family at all because, and this is an exact quote, “A daughter’s gift is always putting her own parent’s first.” (20 plus years later I’m still in awe he uttered those words with a straight face.)

Finally, we pulled what I’m now going to call a “Meghan and Harry” and just did what we wanted because there’s no way you’re going to please everyone in your family – ever.

What impresses me about this latest royal melt down is that the Queen is still a force to be reckoned with. At 93 she has still got it – big time. With equal parts love and harsh common sense, she swiftly said a great big no to the whole part-time royal scenario. But I also have to give props to the newly liberated Harry and Meghan. They got their monarchical umbilical cord cut in under two weeks. Let’s hope it turns out to be what they wanted.

I wish this duo nothing but the best of luck in their new adventure, but I have to caution them that being a member of any family is inherently messy and while you can run you can’t hide – crown or no crown.

3 thoughts on “Family Drama Can Be a Royal Pain”