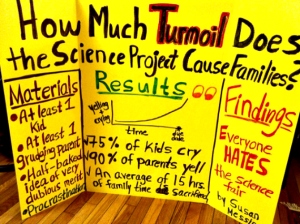 I recently walked into a Michaels craft store and had a post-traumatic stress episode so intense I had to grab onto a shopping cart for support. Trust me, I don’t have anything against Michaels. What was a mighty punch in my emotional baggage was the flood of panicked memories of school projects, from last-minute dioramas to the dreaded Invention Convention entries to, God help me, science fair projects. It’s been almost a good 10 years since I’ve had to “assist” with anything related to a science fair, but to this day, I can’t even look at one of those three-sided display boards without feeling like I’m going to heave.

Michaels, Hobby Lobby and basically any store that sells poster board, modeling clay and fabric that resembles a prehistoric woolly mammoth’s pelt are not my happy places. The smell of foam board alone mixed with the off-gassing of a Sharpie Magnum marker is enough to make me have an anxiety attack. For me, the least crafty mammal with opposable thumbs in the free world, Michaels represents numerous parenting fails. It was where I was vanquished – where I had to fly the white flag of surrender in the winner-take-all game of competitive parenting — sub category: school projects.

It all started back when my son was very young with what I thought was an innocuous 100th day of school assignment. The teacher wanted each child to bring in 100 items of one thing, like 100 Legos or 100 pennies. My son, at the time, loved trains, so he brought in 100 train stickers. Imagine my shock and awe when, the morning the assignment was due, I witnessed children and parents bringing in works of art related to the 100th day of school.

There was one child who had a neon sign that was the number 100 and it was covered in 100 colored bulbs. A little girl and her mother proudly carried in a puppet stage with 100 mini puppets. Another mom had baked 100 cookies that were the numbers 1 to 100.But wait, there’s more: They were painstakingly decorated in royal icing, with each cookie having their own personality. The number 50 was in a suit. Number 75 had on a ball gown. Twenty-five had glasses and a book. It was breathtaking. I’m sure it took days and days of decorating.

Meanwhile, my kid is clutching a couple of sheets of train stickers. They good news is he didn’t seem to care that he was, umm, let’s say, project challenged. His main focus, along with the other kids, seemed to be when they would be allowed to eat one of those number cookies.

I, on the other hand, was mortified. There was a dumpster fire of psychological turmoil searing my mom brain. Had I let my precious boy down? Was I somehow lacking as a mother because I didn’t bring in 100 handmade trains that were not only edible but also puppets? Would other parents perceive my lack of walking into a classroom without a showstopper project as a metaphor that I didn’t love my child? I barely made it to my car before I started doing the ugly cry.

My husband tried to lift my spirits with logic, which, any women will tell you, is always a bad move. I didn’t need to hear about how the project should be, at the very least, partially done by the kids and that the other moms “weren’t doing their child any favors by doing their homework.” What I needed was retribution, and I would get it with the next project.

I had to wait a couple of months, but then it was time to make my move. The assignment was to draw an outline of your child on a roll of brown butcher paper, and then your kid would decorate the image as a character from his or her favorite book. My son was all about Thomas the Tank Engine books, so “he” was going to design the image to be a train conductor. But, I barely let him pick up a crayon because I had commenced on a coloring tour de force. Not only did I color the image, but I even glued real brass buttons on the uniform for a 3D effect.I thought it was a masterpiece — until we got to school.

One mom had made her child’s full-body image into a pillow decorated as Cinderella. And forget about crayons; she had sewn on a gown and all the accoutrements. Another mom had taken a photo of her son’s face and blown it up so it was life-size, and then she decked out the image with real leather chaps, a cowboy hat and a lasso. Going into that school with my coloring project was a long, lonely slog of maternal shame.

Again, my son didn’t seem to care that his homework was sub par. He was too busy wanting to get his hands on the cowboy lasso. It was then and there that I entered a lonely world rife with doubt and self-recrimination. I was going to be the parent that took a backseat to “helping” with school projects.

Oh, sure, you can bet my battle cry was the sanctimonious, “My husband and I don’t believe in doing our children’s homework.” But inside, I was d-y-i-n-g. Every god-awful diorama, mammoth tusk and project board with lettering so crooked you had to turn your head sideways to read it was like a stab to my heart. But I walked into every single school open house, science fair and invention contest with my head held high.

I knew moms were thinking, “Who let their kid turn that in?” Moms who had relatives who were welders and could make fourth-grade inventions that required advanced training in oceanic combustion science. Or moms who could sew and design a fabric replica of a person’s autoimmune system. Or even moms who  knew how to make snow continually fall on her child’s Alaska-based Athapaskan Indian tribe diorama. It was brutal. Not even both my kids trying to soothe me with the words, “Don’t worry, Mom, everyone gets an A,” helped.

My grand hope is that someday, with enough passage of time, I can once again walk into a craft store and not have chest pains when I catch a whiff of Crayola air-dry modeling clay. Until then, I remain a mother still in recovery from 18 years of school projects.