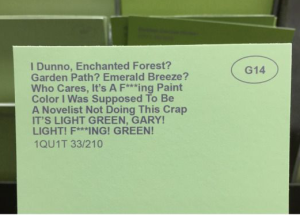 w what I want to do with my life. Yes, it took a while and most certainly my career meandered through many twists, turns, and some cavernous sink holes but today I’m going to share with you my true calling. It’s something so simple and yet so glorious I’m embarrassed it never occurred to me that I could do it and do it well. For you see, I’m embarking on a career as a “prénom.

A prénom is a person who names things (hence the French word for name) for a living from paint colors to weather crisis. Did I just make up that whole thing up in an attempt to launch myself into a new job that I’m not sure exists? Perhaps.

But before you roll your eyes let me make my case for the world’s urgent need for prénoms. All you have to do is look no further than when we were at the mercy of a polar vortex. Did you get sick of hearing that term over and over again while you prayed that your pipes wouldn’t burst and become basement water cannons? I’m going to vigorously assume that your answer is yes.

Wouldn’t it have been much more descriptive and catchier if the term polar vortex got some word accessories like “piercing polarthermia” and “below zero brutality.” Admit it both phrases are an upgrade from polar vortex. Just saying “piercing polarthermia” out loud makes me shiver and bonus points for the alliteration. I’m certain TV weather forecasters would embrace the term with gusto. Never mind, the meme gold mine the phrases would create.

Just think of all the bits and pieces of our daily existence that require names, especially in the home design trade. Every single one of us has looked at a paint chip and gone WTH? I’m currently looking at a Benjamin Moore paint chip that is called “Beau Green.” I have two solid take aways from this name. One, Benjamin Moore needs to hire me because two, “Beau Green” tells you nothing about what kind of green it is. A better name would be the “Color of the Pool Water at a Really Sketchy Motel.”

I’m going to bet that you immediately conjured up the correct color green. Not to brag, but that’s what they call a gift. Wallpaper names are just as bad. I almost bought wallpaper for my half bath called “Ebru.” After doing some research I discovered it means paper marbling in Turkish. But a better name would have been “Tree Trunk Under a Microscope.” Again, you’re totally seeing it, right?

Toilet names are an area that is crying for a prénom. Continuing on with my half bath theme I found one called “Empress Bouquet.” What does that even mean and why do I want that in my bathroom? With this toilet’s high-tech features and mega flush power, a more accurate name is “Plunge No More.” Right there, you know what you’re getting and who doesn’t want to retire their plunger?

Sink names are also ridiculous and so pretentious. I was gazing at farm-house sinks and the names all sound like surnames of the British aristocracy during Queen Victoria’s reign. There’s Alcott, Eton, Aldrich, and even a Grosvenor. What does that have to do with a sink? As a professional prénom I would have gone with “Martha Stewart’s Kitchen.” Again, the visual is instantaneous.

I don’t know who is naming all this stuff (and don’t get me started on the names of nail polish colors) but I feel someone with my skill is needed. Our lives are fast paced and confusing and the very least companies can do is attach a semblance of accuracy to their products names. Now excuse me while I go tweak my resume or what I, as a professional prénom, would call a “slightly exaggerated timeline of my talents.”

6 thoughts on “Wanted: A Career as a Professional “Namer””