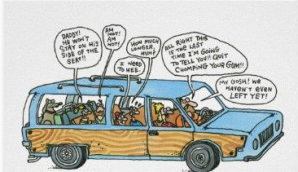 As spring breaks begins and families hit the road all I can think about is how easy kids today have it in regards to traveling. Remember the days of yesteryear when there was no escaping your siblings and you were forced to listen to whatever your dad had turned up on the radio or (shudder) the John Denver 8 track your mom loved.

Today, my daughter gets in the car, immediately shoves her Apple AirPod’s into her ears and then proceeds to stare at her phone for the next 12 hours. It’s like she’s in her own private transport bubble.

In an attempt to scare 21st century kids into being extremely grateful for all their modern car conveniences I’ve compiled a list of the top 7 horrors I had to endure during my childhood road trips. Warning: This story contains frightening detail and may trigger a PTSD episode in anyone over 40.

1)You haven’t really lived until you’ve driven from Massachusetts to Florida in a 1970 Ford LTD Country Squire Station Wagon while riding backwards the entire 1,350 miles. Being the youngest my sister and I were always forced to sit in the 70’s version of the third row of seats which, for some reason, faced backwards. It was guaranteed to induce a vomiting episode at about mile maker 200. On the positive side, it was great training to be either a) A fighter pilot and/or b) A roller coaster enthusiast because five years of facing backwards while hauling down an interstate gives your crazy good motion sickness control skills.

2) Decades ago there was barely any freeway fast food so your mom packed every meal that you were going to eat in the car and while a tuna salad sandwich sounds good at noon eating one another one six hours later after it’s been steeped in the floor board juices is about as gross as it gets.

3) Who needs electronic devices when you can play license plate bingo for h-o-u-r-s? It’s an especially riveting game when it takes almost a full day to get out of the state of Texas and it’s an exotic sighting when you see a car with a license plate from Oklahoma.

4) Back in the day there wasn’t a QuikTrip on every corner and gas stations on the interstate weren’t as plentiful as they are now. This meant that potty breaks happened at “rest stops” which were part serial killer liar and breeding ground for Ebola. The worst were rest stops that didn’t have plumbing and instead used chemical toilets with signs on the front of the door that read “Beware of Bears.” This is why I learned to “hold it” for 20 hours and is probably also why I’m now susceptible to UTI infections.

5) I don’t know who invented the game Punch Buggy, but let’s call it what it really is – sanctioned abuse. Nothing says family bonding like siblings using seeing a Volkswagen on the highway as an excuse to throttle each other.

6) My dad in the 1970s was a man with plan. I believe one of his supreme pleasures in life was “making great time” while driving to a vacation location. This meant he hardly ever took his foot off the accelerator and if we had to make an “unscheduled” stop due to the call of nature, well his disappointment would permeate the vehicle like one of those bad tuna salad sandwiches.

7) The hands down worst road trip memory is doing all the above without air conditioning. Oh, yes, imagine hurling down Interstate 35 at 80 mph with the windows down, while riding backwards, eating a tuna sandwich, desperately needing to go the bathroom and getting punched in the arm by your brothers good times.