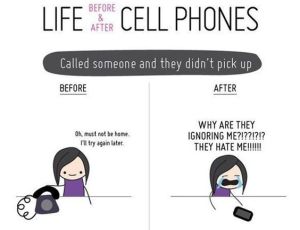 I lost my phone for 14 hours and I can honestly say it was a serene almost spa like experience. It didn’t start out that way, but in the end, I give being phone free two enthusiastic texting thumbs up.

My story begins on a frigid winter morning where the ice on your car windshield is thick and the heated seats inside your vehicle can’t get hot fast enough. I left my house for work in a harried, mild panic. The only way I wasn’t going to be late for my job is if I nixed my morning McDonald’s Diet Coke run. It was a “Sophia’s Choice” for me – and, of course, Diet Coke prevailed.

As I was sitting in the drive thru I was horrified to discover I was phone-less. I looked in my purse, in-between the seats and even under. Yep, I was a woman without a phone.

It wasn’t even eight o’clock in the morning yet, and I was faced with my second “Sophie’s Choice” of the day. Go home and get my phone thus ensuring a very tardy arrival to the office or go where I hadn’t been since 2003 – untethered to a mobile communication device.

I weighed the pros and cons primarily what would my family do if I wasn’t responding to their texts – because no one I live with ever uses their phone to have an actual oral conversation. Would they get concerned or even scared if I wasn’t sending them multiple kissing and winky faces along with the okay sign emojis during the day?

I took a deep breath and made the hard decision that yes they would survive. It wouldn’t be easy because I day without emoji’s is like perennially existing with the sun trapped behind a jumbo puffy cloud. But I was going to make the brave choice. I wasn’t going home to get my phone. It was going to just be me and my wits. I was going solo.

The first thing I did when I got to my office was look up my husband’s office phone number. I had never memorized his cell number which means, of course, I didn’t’ know his office number. I then did something that almost scared me I had to use a land line. It was a weird to hold a phone receiver in one hand and then use the other to dial. It felt awkward and almost foreign.

When I called my husband, in a surprise to no one, he didn’t answer. So, I left a message that I would be phone-less all day and to text the kids that if they had an emergency (and by that, I mean they needed money or wanted to complain to me about something) that he would be their “go to” not me.

At the beginning of the day it was as if I had lost an appendage. I found myself reaching for my phone every few minutes.  I would think, oh, I need to check a text or I would want to go to one of my apps. It took at least an hour for it to register in my brain that my phone wasn’t with me.

By lunchtime though things had changed. I noticed I was getting at ton done at work. I had almost zero distractions and I felt like had a laser focus.

When mid afternoon hit I began to feel free, less weighed down without the tedium of everyone else’s existence. I didn’t know what was happening in the world and nor did I get to experience the time suck of a social media feed.

It was glorious. So much so, that when I was reunited with my phone I felt a little sad and realized that for all the wonder of having a palm size computer with you 24/7 there’s a tradeoff and it’s freedom.