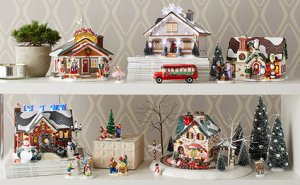 My first words of wisdom for 2018 are be careful what gifts you ooh and aah over because it could come back to bite you in the butt – big time.

Thirty long years ago I received a darling Snow Village from my mother-in-law as a Christmas present. For those of you blissfully unaware of the wonder of holiday tchotchkes a Snow Village is a brand of ceramics that depict winter scenes with yuletide flair. There’s train stations, diners, ice cream shops, ski lodges etc.

My first Snow Village was an old-fashioned movie theatre, dripping in snow with White Christmas on the marquee. I was delighted by the gift since I was newly married and had zero in the way of holiday decoration.

Now three decades in I’m buried in Snow Villages. My lovely mother-in-law has given me at least one Snow Village every year for Christmas and I think they maybe the death of me.

Alert readers may now be recalling how I wrote about pine garland trying to kill me in December of 2016, but that was operator error (me, a six-foot ladder and a hammer – what could go wrong?) The Snow Villages are out for blood and it has nothing to do with me being an idiot.

Let’s start with examining where the attempted murder took place – my basement. There you’ll find more than 60 Styrofoam boxes strewed on the floor. Each Snow Village is packed in a Styrofoam box designed to fit their unique structure. Putting the Snow Village back in its correct box is such a tight squeeze that the sound of gently cramming the village in its storage coffin creates a sound so shrill and nerve shattering that it makes fingernails on a chalkboard sound like Brahms Lullaby.

Now imagine hearing this sound 30 plus times. It feels like my brain is seizing. I even wear my lawn mower earmuffs and it’s still like my auditory canal is getting a beat down from a masonry drill. I’m sure in some CIA prisoner de-briefing room there’s an agent wearing NASA grade hearing protection repeatedly putting Snow Villages into their Styrofoam boxes in hopes of eliciting a confession.

Once I’ve cheated death and survived putting the Snow Villages back in their Styrofoam pods it’s time to move onto part two of the storage conundrum or as I like to call it murder by Christmas crates.

Due to the unique size of each Snow Village you can’t fit that many into those large red and green bins you get from Target. This means in Snow Village math that I need almost two dozen bins to house the villages. Then I must stack each of these large plastic units in the icky part of my basement that looks like’s an abandon concrete munitions storage bunker from WWII.

As I’m standing back and admiring my brute strength and majestic stacking ability that created four rows of bins that measure 5 crates high the whole monument to my organizational skills starts falling. First the top crate in the middle comes for me, like right at me, as if I was a bullseye in a carnival shooting gallery. Then they all start tumbling. It was an avalanche of plastic.

I start screaming, but in the deep sub terrain space of your basement no one can hear your cries for help. As I lay on the cold concrete floor covered in Christmas bins I think about crying and selling all the Snow Villages on Craig’s List. But then I bucked up.

These Snow Villages will not vanquish me. I got up, restacked the bins, albeit this time only four crates high, and told myself that perhaps next Christmas the villages would get a time out in the basement that would last the entire holiday or eternity.

13 thoughts on “Death by Snow Villages”