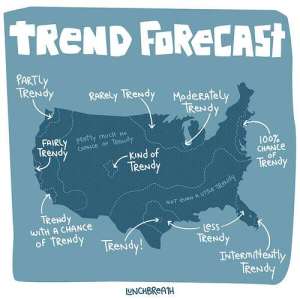 Being a “trend forecaster” sounds like a great job. Mainly because you never have to be right. You’re forecasting not stating fact. This means nobody can call you out for getting anything wrong and if they do you just shrug your shoulders and cite unforeseen mitigating circumstances. Basically, you’re golden.

That said, even though being a trend forecasting sounds low stress I think I would be awful at it. Not only can I not predict a trend if my life depended on it, I have vehemently pooh-pooh emerging trends, as in “they’ll never last,” that have become cultural zeitgeist.

One of my biggest missed predictions were stainless steel appliances. Way back in 1998 I was redoing my kitchen and the guy at the Sear’s store (yes, this was so long ago Sears was THE place for your appliances) told me I should hop on the stainless-steel bandwagon.

I scoffed at his suggestion, got on my high horse and proclaimed “stainless steel should only be in two places – morgues and hospitals.” I then went on to say that “the look would die a quick death and the only people dumb enough to buy stainless appliances were serial killers.” I also added that law enforcement should start some kind of database to track who buys stainless steel appliances and use it as tool to profile predators.

Well, well, well, lookie there it’s 2018 and stainless steel appliances are still all the rage. I feel like I need to find that nice Sear’s employee and write him an apology letter.

My other huge “OMG that’s never going to last” were yoga pants. When women started becoming obsessed with Lyrca leggings I was all about the deep diss. I compared them to the stirrup pants a lot of us wore in the 1980’s. Really, how could I not? They’re the same minus the stirrup. Elastic waistband – check. Lyrca infused material – check. Basically, tights disguised as pants so retailers can charge 10 times as much – check.

Never could I have imagined that yoga pants would not only take over the fashion world and become a di-riguer part of almost every woman’s wardrobe, but also launch entire retail chains like Lululemon.

Then there’s that freaking Elf on the Shelf. The Elf emerged on the scene when my children were very young. I was its target demographic – a mom who wanted to make Christmas perfect. Every mother I knew was enthralled with the Elf when it first hit the stores. At my children’s school I was the lone dissenter.

I openly mocked the mothers for falling for something that was 1) Creeptasic. 2) Took attention away from Santa Claus. I’m a purist. When it comes to the North Pole Santa is my main man and no elf should be sharing or hogging the spotlight and 3) Required a lot of daily effort plus you had to weave a tangled web of fibs, that in my opinion, the elf was unworthy of. (See point #2)

I was beyond certain that the Elf would be a tacky flash in the pan. So, yeah, I think we all know how that turned out. More than a decade later the Elf is going strong. It’s got a girlfriend, there’s a line of “couture” clothes for the Elf and it’s spawned board games and Elf pets.

Seriously could I be any more clueless about what people are going to like? Hmm, maybe that’s my talent being out of-touch or maybe, and I like this one a whole lot better, I’m just too cool to gauge what the masses will respond too. Yeah, let’s go with that. Definitely that’s what it is.