I’m a little dismayed about what I’ve been seeing on social media in regards to Thanksgiving. A good two weeks ago I started gazing at o 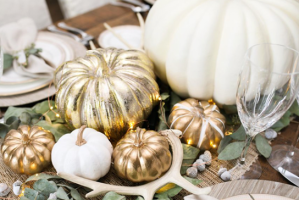 odles of Thanksgiving posts and not a one was about food. (Mercifully there were zero gratitude posts. Although, I do miss mocking the humble brag disguised as a gratitude post. As in “I’m thankful for my second home in Hawaii and our private jet time share.”)

Now to be sure there were a lot of glamour shots of dining room tables, but they were empty of anything yummy or even edible. All the pictures featured tables that were already set for Thanksgiving with captions like “I’m ready!” or “I can’t wait.”

These tables were la-ti-da fancy because when I say “set for Thanksgiving” set should be in all caps because these were not dining room tables with some silverware, plates, Pilgrim napkin ring holders and turkey salt and pepper shakers. Umm no, what I was gazing at were “tablescapes.”

Tablescapes are described as “works of art that express the creator’s interpretation of the season.” Turkey and pecan pie step aside because apparently Thanksgiving is now interpreted as a celebration of gourd-topia. There were glitter gourds, bejeweled gourds, fabric gourds, flocked gourds, plush gourds, decoupage gourds and even gourds covered in buttons. (Yeah, I know weird.)

The gourds ran the length of the table and usually had a fat ribbon or some sort of organza looking material intertwined amongst them and assortment of silk leaves and what appeared to be pheasant feathers. Then there was the illumination. About every couple of inches there were candles casting off a twinkle onto the gourd city. It was all very beautiful (except for the button gourds) and I thought it looked like decorations at debutante ball for gourds. You know if gourds did that sort of thing.

Regardless of the beauty of the tablescapes I have to tell you not only I’m a not a fan. I just don’t get it. First, because setting your table two weeks early is a public health concern. Unless your dining room is ensconced in a plastic bubble how can you set your table that early? Won’t your china, crystal, and silverware collect two weeks of dust, cat hair and dog dander. I mean it’s all just sitting out there in the wide-open space that is a dining room like a Swiffer collecting 14 days of pre-Thanksgiving fur castoffs and the refuse of the random family member sneezing fit. Ewww.

No onto the bigger problem with tablescapes in general. They take up too much room! As in they consume valuable food real estate. Where are you going to put the turkey, the dressing, the mashed potatoes, and the sainted sweet potato casserole? Not on the table, that’s for sure, because the freaking gourds are taking up all the space. Answer me this what’s better on a table a gourd with a shimmer overlay or the gravy boat within arms reach?

On Thanksgiving the food is the star. The turkey is the A-lister, the green bean casserole and the pumpkin pie the supporting cast. It’s time to start a free the table movement! We need to take back the Thanksgiving table to ensure the next generation knows that it’s not about the inedible frou-frou. It’s about celebrating foods that are besties with butter. It’s all about the stuffing (yourself and the cornbread variety.)

Now will someone please move the sparkle gourds and pass the squash casserole.

2 thoughts on “Tablescapes Confuse Me”