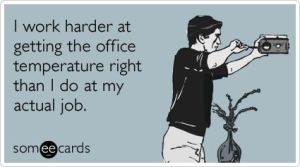 Right about now summer is sucking the life out of me. I don’t care if we managed to dip into the high 80’s for a couple of days because I’m still in a recovery program from when the heat index was 114.

I’d like to be one of those brave or crazy people who you see outside jogging when the temperature is hell adjacent. They mystify me. How do they do it? How do they willing journey outside to baste in sunscreen and sweat and then slowly grill themselves on the sidewalk?

Doctors call this “Hansel and Gretel syndrome.” It’s when people have a perverse need to be extra toasty. Okay, I just made that up, but seriously I think, I missed my calling by not going into the medical sciences because, come on, doesn’t’ Hansel and Gretel syndrome sound like it should be a thing? At the very least it’s kinder than calling someone insane.

I’m willing to admit that perhaps I also need a label. I’m certain I’m suffering from a sensory disorder called “Forever Frosty” because I’ve always felt the need for extra chill. I don’t even like to turn my heat on in the winter. I swear on the life of my XV20i TruComfort Variable Speed AC unit that family members have been known to wear coats and mittens inside my home. I don’t even feel guilty because it’s a cozy look and I’m always offering up hot chocolate.

The extremely good news is that I married another fellow “Forever Frosty.” I can’t imagine the level of conflict and suffering if a Hansel and Gretel hooked up with a Forever Frosty. The fights over the thermostat settings would be brutal and the F.F. would and should always win because to quote my mother “You can always add on layers to get warm, but you can’t march around stark naked in public to cool off.”

This means the H&G should put on a down coat, thermal socks, insulated gloves and just deal with it. Harsh, perhaps, but the logic is sound. And I’m warning you don’t you start questioning the wisdom of my mama.

That common-sense advice should also, in my opinion, be followed in any work setting. There should be no do-si-do’ing do with the thermostat. A recent study showed that 3 in 5 employees tamper with the office thermostat to make their surroundings warmer.

Beware Hansels and Gretals have taken over the work force!

I recently moved to an office where the ambient temperature was the corona of the sun. I was bewildered and downright scared about what had happened to make an office feel like I was a corn dog being fried in iffy carnival oil. After some impressive A.C. forensics it was discovered that the previous inhabitant(s) had dislodge a ceiling tile and jammed up the air duct.

What fiendish soul or souls are that cold in the middle of a sweltering summer that they would without remorse smother the air conditioning delivery system? It was murder plain and simple. Death to a duct by asphyxiation.

I was certain no one would cop to committing the crime so I started a covert investigation on my own. My first clue was discovering who had space heaters under their desk spewing out sinfully hot air on a day when the temperature was one degree away from triple digits. This narrowed my suspect pool down to two. I then with some not very aggressive questioning got a full confession.

The perp was obviously in the throes of a full-fledged Hansel and Gretel psychotic break with temperature reality and I had nothing but sympathy and a hot beverage for them.

What else could I do? I may be a life-long Forever Frosty, but my feelings aren’t frozen.