I’ve been noticing the 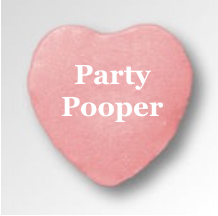 trend of elementary schools across the country reducing the number of school parties they allow. Educators cite that the parties cut into “valuable instructional time.” One school in Minnesota last week announced that they were banning the celebration of “dominant holidays” — including Valentine’s Day. (Oh, the social media outrage over that one.)

But I, a seasoned mother, know the real reason for the festivities downsizing and let me just say I’ve seen this coming for at least a decade. School officials’ being party poopers has less to do with educational downtime and everything to do with parents. Yes, mommy and daddy are the culprit for schools taking safety scissors and trimming the holiday party calendar. I believe it’s all part of an effort on the schools part to thin the parent herd that has infiltrated their domain.

I’m specifically talking about, suburban schools and the abundance of “Over” parents – as in over involved, overly competitive, and overly controlling. I saw a few of these species when my son was young. They were more of a shake your head oddity like thinking you’ve seen a unicorn and then realizing it was just a horse standing next to a crooked fence post. By the time my daughter (my youngest) entered kindergarten the “Over” parent was as common as a Vera Bradley backpack on a four-year-old.

The first order of business on the “Over’s” elementary school domination checklist is usually the holiday party. Think of it as being like the Iowa caucus. This is a proving ground where the “Over” let folks know he or she is going to be contender.

Believe me I know that being a school volunteer is a wondrous thing. I’ve done it and loved it and I’m aware that the strongest schools are those with parent participation. But, I don’t think it was ever meant to be your raison d’être. I also doubt the mental stability of any adult who has control issues so massive that the eats at a second grade Valentine’s Day party are worthy of multiple parent emails outlining a shopping list and presentation guide. I kid you not one year I was told to bring cheddar cheese (from a grass-fed cow) cut into three different heart shapes with cookie cutters (in descending sizes) and then stacked together to form a tri-level heart.

Did I do it? Heck yeah (except I 86’ed the speciality cow thing and went grocery store brand cheddar). The mom was scary. I was afraid she would go all Chef Gordon Ramsay psycho on me if I dared to disobey and brought Velveeta squares. I had seen her bakery bash a new mom who cluelessly went off script and brought those iced with sprinkles Walmart cookies to the fall party. It was brutal.

But, it’s not just about control there’s some competition going on as well. I call it the “look at me being the superior parent” syndrome. This need for establishing an identity through a child’s activity is so prevalent the long-term implications worry me. It’s FOMO (fear of missing out) combined with the “Over”whelming need to establish yourself in some sort of parent pecking order.

If you doubt me on this all you need to do is go to any kid’s extracurricular event. The fact that some youth sports leagues now have to post, what I call reality check, signs reminding parents that most, if not all, of the kids participating will not be going on to play professional sports is beyond insane.

The “Over” parent has killed more than just school holiday parties. I’ve know of a couple of schools that have said adios to Invention and Science Fairs because it as one teacher put it, “We were tired of grading projects that parents obviously did.” And, may I add, did without even the tiniest tidbit of embarrassment. We’ve reached an era where parents cloaked in designer hubris don’t even attempt to hide their “assistance” on school projects.

In fact, the last elementary school “Invention Convention” I went to should have been renamed “The Walk of Parental Shame.” Almost all of the projects were obviously done by middle-aged humans taking glucosamine for joint relief.

How did we get this way? Our moms and dads weren’t role models for this kind of unhinged parenting. They showed up at school for special occasions, provided limited assistance with homework, went to our ball games and other activities, but they sure weren’t doing our projects and just a big heck no anything approaching writing our college essay.

I see the pruning of the school parties as the canary in the coal mine. It’s a warning shot across the bow that we, as parents, need to not just evaluate our hyper level of involvement in our children’s lives, but examine our motives behind it as well.