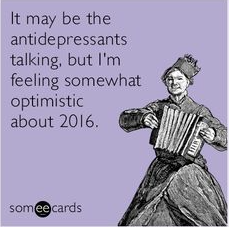 Ack! A new year. Someone hold me I’m scared. There’s just way too much pressure associated with a new beginning. Sure, a fresh year is full of promise and you know all that other good stuff like making goals and realizing or redirecting your infinite potential, but it can also be like walking barefoot on a shag carpet that’s laced with Batman Legos – a big ouch! (You don’t know real pain until you’ve stepped on Batman’s pointy, little Lego ears.)

Take losing weight. Wait, nope, scratch that. Losing weight is so 2015. The 2016 way to classify dropping 20 pounds is now called personal optimization. What it really should be labeled is “The 2fer of Shame.”  Why 2Fer? Because not only do most of us never achieve our goal weight, but then we feel bad about it and spend countless hours beating ourselves up over it as we eat an entire container of discounted holiday Poppycock and watch My 600-lb Life on TLC thinking, “Well, at least I’m not on a TV show starring the morbidly obese.” Okay, that might just be me who does that, but still you get my point. More often than not all that New Year New You jargon results in is the old you feeling like a failure.

That’s why I, in an attempt to kickstart 2016 right in it’s pristine, unsoiled by resolutions that  disappeared at the first sighting of a Krispy Kreme drive thru, posterior started my New Year New You campaign way back in November. Therefore already accomplishing one of my resolutions to be more organized by getting a two month running head start on everyone else. (Can you say genius move?)

To begin my 2016 self-improvement campaign I did loads of research which means I went to Barnes and Noble and before I could even make it to the self-help area was distracted by an Us Weekly magazine. Now some of you maybe beyond proud that you can do 50 of those burpee things which, come one, are really re-branded squat thrusts that we all did back in middle school P.E. So let’s call them what they are – 7th grade gym exercises that made us cry. I, not being a burpee girl, am all braggy about my ability to read an Us Weekly in under four minutes.

My personal best was back in April of 2004 with Jennifer Aniston’s “super sexy secrets revealed” on the cover. I read the entire issue in three minutes thirty-seven seconds. Go ahead be impressed. I welcome your awe. So based on this how could I not stop and time myself as I read an Us? The bad news, I did not break my record. I blame the riveting article (and in US Weekly terminology that would be three sentences) on Khloe Kardashian.

After I clocked a disappointing 3:58 I continued my journey to self-help and this where I saw the bestseller Year of Yes. The Year of Yes is written by the super talented Shonda Rhimes who created the T.V. shows Grey’s Anatomy and Scandal. In her book, or at least the part a read while in the B&N Starbucks line, this amazing woman shares how her entire life changed when she “committed to saying yes to everything for one year.” This got me excited. I could do this.

Hello to another resolution and buh bye to my sanity.

This saying yes thing did even make it a week because besides the predictable things that are going to happen when you say yes like your children thinking they’ve died and gone to heaven is that you get stuck doing things you have avoided, with good reason, all your life. Now, thanks to a scant 72 hours where I said yes I’m now recording secretary on two non-profit boards!

I love volunteering, but recording secretary is a position I have always avoided primarily because you have to pay rapt attention the entire board meeting. And If it’s a lunch meeting you can’t even take delicate board size bites of your Panera turkey sandwich because you’re typing away like a 1950’s court reporter in a Perry Mason T.V. procedural. There’s not even time for an eye roll (and were’s the fun it that?) when a know it all board member (and really there’s one on almost every board) begins his or her’s scolding/lecture about how “we’re doing it all wrong.”  Ugh. I don’t know about you, but I think I’m more of a “Year of No” type of person.

My next resolution was courtesy of the book The Life-Changing Magic of Tidying Up: The Japanese Art of Decluttering and Organizing. My take away from this book was that in organizing your life and your surroundings you should only keep things that bring you joy. I tested out this resolution while making the annual spring/summer to fall/winter clothing change over. While going through my clothes I made two stacks. One was a joy pile – clothes that made me happy and the other was a ho-hum pile – clothes that I had little or no feelings about.

There was a big, big, problem with my two piles. If I chose to wear only the clothes that made me happy I would most likely be arrested and committed to a long-term mental health facility. This is because in my joy pile were all my “skinny” clothes I kept in the delusional hope that someday I will be able to wear them again, my worn out sweatpants, and my wedding dress.

Here’s a fashion statement for you. A very middle-aged woman barely wearing a wedding dress from the 1980’s because it’s so small on her she can’t zip it or I fear duct tape it together with puffy sleeves so large they could do double duty as a landing pad for First Responders and underneath it all she has on sweatpants and a tube top from Port Aransas Spring Break 1984. Now imagine this woman running errands in that “joy” ensemble and raise your hand if don’t think some frightened Target employee wouldn’t dial 911.

This is when I had an epiphany. I was making the wrong resolutions. I needed to think bigger, not be so me focused, so selfish. I should branch out and think global. So, after much thought I have a new list and I’m going to pat myself on the back a little and share it’s going great. I’m really sacrificing and doing what it takes to make sure these resolutions stick. For instance, one of my top five resolutions involves watching more Bravo television in an effort to it’s help it’s parent company NBCUniversal boost their profits therefore ensuring job security for thousands. It means making an extra effort, but I can proudly rejoice that I’ve yet to miss one episode of the Real Housewives of Beverly Hills. I don’t want to jinx it, but 2016 just maybe the year I finally achieve New Year’s resolution success.

3 thoughts on “Winning the New Year/New You Game”