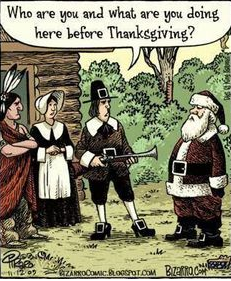 It’s taken a lot of discipline and dedication to make it to this day without giving in or being weak. Oh, how I’ve wanted to not just succumb but to throw myself in with the herd and celebrate being one of “those people.”

But, I can’t. I. Must. Stay. Strong. I’m almost to the finish line. All I need to do is gut it out for 24 more hours and I’ve done it. I’ve achieved my goal, no forget that, it’s not a goal. A goal is something you’re aiming to accomplish. What I’m talking about is so much more important than any goal. It’s about obeying your mother which you don’t approach with a half-hearted, namby pamby “I’ll try.” No, maternal obedience from an adult daughter demands, a “must do” attitude.

This steadfast compliance in the face of overwhelming temptation is why it took everything I had while buying leaf bags at Lowes to not lovingly gaze at a fresh evergreen garland with a sassy overlay of candy canes and a sprinkling of faux snow that screams Santa + Jack Frost = Best Friends Forever. You see, I was raised from a very young age to embrace one of my mother’s most fundamental edicts – thou shalt not decorate for Christmas before Thanksgiving.

This used to be one of my mom’s easier rules to obey. Back in the day most folks didn’t even put a tree up until December Uno. It was downright weird to see anyone going full holly jolly before you could actually start opening a flap on your Advent calendar. This was primarily because everyone had “real” Christmas trees. Time travel back to the 1970’s and the fake Frasier Fir was so flammable some counties had outlawed it. Never mind that it looked almost as artificial as the facelift my great Aunt Ethel got in Guadalajara, Mexico circa 1972.

Once faux Christmas trees reached an authenticity level so acute that it could fool even the most discerning of squirrels the last remaining barrier to premature Christmas decor was breached. Now, it’s almost impossible to not I spy at least one neighbor with Christmas lights up in October. The neighbor might not have the lights on but they’re up and if I follow my mother’s rule to the letter that’s still a no, no.

I always admired my mother’s keen passion for keeping Thanksgiving as a separate event and not smooshing it together with the Christmas season so it becomes like a piece of chocolate in a s’more. You know how when you eat a s’more you get a taste of the chocolate, but it’s totally overwhelmed by the gooey, bulky show off that is a charred marshmallow. That’s exactly what she thought happened to Thanksgiving when you’re carving the turkey next to a fully flocked Christmas tree.

Growing up, especially as teenagers, my sister and I would delight in aggravating my mother by pointing out people in town who had Christmas decorations up early and to be truthful early to my mom was anytime before the first weekend in December. When a salacious marital cheating scandal happened to a prominent citizen my mom’s very pious response was, “Well, what did anyone except from that woman. She had Christmas up before you could even buy a Butterball in the grocery store. I’m telling you it speaks to character.”

When I pressed my mother for details about how exactly putting Christmas decorations up before Thanksgiving was a moral defect. She looked at me like I had just asked if writing thank you notes was ever optional and responded, “You don’t skip over Thanksgiving just because something better in the form of Christmas is lurking all bright and shiny around the corner and you don’t skip out of a marriage for exactly that same reason. It would behoove you to remember that young lady.”

Remember it I did. And as much as I have always wanted to get started on putting up Christmas decorations early (because what woman with a holiday To Do list a mile long doesn’t want to start getting stuff done) I lived in fear my mother would find out and have a very dignified, and somewhat reserved, hissy fit. (Think of it as a long, drawn out, sigh of devastating disappointment.)

This year is the first Thanksgiving I’ll celebrate without my mother. She passed away in March. My sister called me and asked if I was going to start decorating early. I told her no way because I believe with all my heart my mom is still with us and she would somehow manage to express her disapproval from the great beyond.

“I feel the same way,” my sister shared. Then we both started laughing. My mother maybe gone but her Thanksgiving spirit or “Holiday Decoration Timeline” is still living large.

Hey, while we’re talking about Christmas do you know what you make a great gift? My Snarky book series. If you haven’t experienced a Snarky book yet may