I know a lot about football for a person who grew up loathing anything to do with the sport. Crack back, chop block, coffin corner – terms that might sound alarming to some people – we’re all part of a childhood that I swear was mostly idyllic.

To calm your fears I will use those terms in a sentence my father might have uttered during any fall weekend of my childhood. “The punter wouldn’t have gotten that chop block while kicking the ball into the coffin corner if a teammate had thrown a crack back.”

See, I told you. Nothing to worry about. I was just a Texas girl who was required to not only love football, but to be knowledgeable about the game. My problem is I didn’t love football. I faked it because what child doesn’t want to make her daddy and, let’s be real here, her state happy?

Truth be told I found football beyond boring and a liar. The game is supposed to last an hour. You’ve got four quarters of 15 minutes each, but what football game has ever been only 60 minutes? As a child I would be perched on aluminum bleachers watching Southwest Conference action sizzling like a deep-fried Twinkie in the grease fryer at the State Fair because September in Texas is not none for its autumnal chill and repeatedly look at the scoreboard and time clock checking my math. How did 15 x 4 = taking up most of my weekend?

You would thought once I got into high school I would finally embrace the whole Friday Night Lights of it all. Yeah, that didn’t happen. Think about it, who wants to spend their Friday evening sitting outside like an offering to the chigger and mosquito Gods and watch a bunch of kids a whole lot more popular than you parade around not only on the field, but field adjacent? In Texas once you hit 14 if you’re actually watching the game from the stands that spells one thing: l-o-s-e-r.

Anyone who’s anybody is either playing the game, a cheerleader, on the drill team (wearing some inappropriate, almost thigh high white patent leather go-go boots, I might add) or in the band. I, being a member of the NFL (not as awesome as it sounds because it stand for National Forensic League) and co recording secretary of the International Thespian Society didn’t exactly make the cool kid cut. My allergy to mums also proved to be an issue.

If you’re confused right now about what mums have to do with football you must not hail from a small town where the high school homecoming game is the pinnacle of the social season. For your edification the mum is the official flower of any event associated with football. At homecoming girls would get morbidly obese mum corsages from their dates that were in a word – horrific. 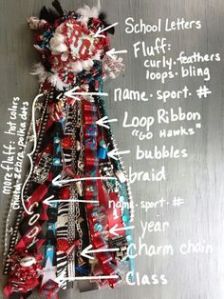 You know the platter you put your Thanksgiving turkey on? That’s how big these mums were and that’s not the worst part. Each mum would have plastic chotskies glued on to them like mini footballs and cheerleader megaphones. Then there were the ribbons. Yards and yards of thick, cheap ribbon was attached to each mum with sayings spelled out in glitter. Usually the ribbons would have the girl and her date’s name on it along with a bible verse because that’s what happens when you live in the buckle of the bible belt. Everything comes with a bible verse. I swear I think most kids first words were “John 3:16.”

Due to my mum allergy I couldn’t wear one. People surmised that my non mum wearing was a sign of anti-American leanings or worse, I wasn’t proud of my school’s football heritage. I was viciously mum shunned. After that there was no turning back. Football was dead to me until I fell in love.

Not just love, but the big LOVE. I’m talking the head over heels, everyday is magical kind of love. My boyfriend was almost perfect except for one flaw. He was obsessed with the Washington Redskins. His mania started in childhood and this meant he had a Redskin helmet, jersey, sheet set (yes he was over 18 with a Redskin sheets. I know this should have a been a deal breaker, but love is blind or at least vision impaired when it comes to decor choices) trading cards and on and on.

A normal, not in love person, would probably just have tolerated the addiction. I, made the ultimate sacrifice and did a Juliet for my Romeo. Yep, I become a Redskin fan. I knew all the words to the fight song. The player roster and could recite the bios of both Joe Theismann and John Riggins. I was all in – for years – because you see I married this crazy Redskin fan.

Say hello to vacations to D.C. planned around going to Redskin games. We were at RFK stadium in 1992 at the NFC Championship game between the Redskins and the Lions and my husband got so excited that the Skins were going to Superbowl he kissed his bleacher mate. No, not me, the other bleacher mate – some strange guy with a hog nose on. (Sigh.)

As much as I tried to quit football it just couldn’t quit me. Seriously, the harder I tried to push it out of my life it just came back with a vengeance even infiltrating my career. As a TV news reporter in Austin, Texas my knowledge of the game meant if someone was sick over in sports I was their go to. I was okay with that, sort of, until the game tried to kill me, yes kill me AND my unborn child.

Dateline: November 4, 1995, Texas Memorial Stadium, 8 p.m. (CST)  The Longhorns were playing Texas Tech. I was five months pregnant and covering the game from the field. The action had moved to the end zone because Texas was about to score. I was bored and hungry. Forget about college football all I could think about nachos. Don’t judge. What pregnant woman when given the choice between football and nachos wouldn’t choose cheesy, greasy, nachos?

As I was in a nacho fog when an almost 200 pound Texas running back comes barreling for the end zone. The problem was he was coming straight towards me! Bigger problem I just stood there like an inert tackling dummy. I remember people screaming at me to move, most especially my husband who was down on the field with me and attempting to pull me to safety.

Finally, it clicked. All the football facts, figures and statistics I had been immersed in my whole life kicked in. I did a roll out curl, then a cut back with a down and out, threw in a little hot dog veer and made it to safety. The crowd went wild. At first, I thought it was for me, but quickly learned it was because the running back scored a touchdown. Oh well. At least I made it on the ESPN highlight reel that night.

I took all this as a sign. It was time to admit I’m a football girl. I guess you can’t escape your destiny.

* You know what a great thing to do is when you’re done watching football? Why read my latest book of course! Duh. You can purchase both of

my Snarky books for just 99 cents! Talk about a savings touchdown.  Go ahead and buy it for your Kindle or in paperback on Amazon.  It’s also available for the Nook or you can get it for your Kobo reader. Click on a link and give it a test read. I hope you like it! 🙂