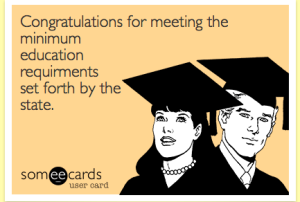 I’m so glad I don’t have a single child graduating from anything this month. Last year at this time I had a son finishing his senior year and a daughter (cue the drum roll) 8th grade. My eldest was deeply mystified about why such a big deal was made out of completing the 12th grade.

The fancy graduation announcements, the parties, the hoopla of it all confused him. He asked, “Why does anyone care that you met the minimum educational requirements set forth by the state? Like I know that would make a really bad Hallmark card, but seriously Mom why the shock and awe about getting out of high school?”

I thought about his questions for a moment and responded with, “Well, it’s all about acknowledging meeting your goals and celebrating your impending adulthood.”

“And by goals do you mean 12 years of not forgetting to turn in your homework?” He replied sarcastically.

“Yes and much, much more. Think of all you did and don’t scoff at goals. Even the smallest ones are important. For instance, right now I have a goal to use up all the “buy 1 get 3 for free mini moisturizers I bought from Bath and Body Works over the past two years. Oh and don’t give me that look?”

“The look that says you think you’re superior to me. Trust me, it’s going to be a challenge to use all of them. You have no idea how many I’ve bought. They’ve got a Ponzi scheme going on in that store. First, they draw you in with a huge sale, then up the ante by throwing some coupons at you and before you know it you’ve got enough Tahiti Island Dream body cream to get you through a ten-year moisturizer drought. Just feel my arm. Really rub it.”

“Umm no thanks,” my son said looking scared.

“Oh come on, touch it. I’m telling you my arm is slimy I’ve got so much lotion on. Sure, it’s a little gross, but it’s all part of achieving my goal of using up all that moisturizer.”

“Mom, how do you do it? Take an intelligent question about education and turn it into a story about body lotion. Do you know you have a problem staying on topic?”

“I, thank you very much, do not have a problem staying on topic. I simply excel at using everyday occurrences and using them as stirring life lessons”

“Yeah, you keep on telling yourself that,” he said with what I thought was a less than respectful tone and then as he walked out of the kitchen announced that I didn’t know what a Ponzi scheme was.”

“What are you talking about?”

“Your lotion story. You used Ponzi scheme wrong. A Ponzi scheme is a fraudulent investment operation. You buying too much creams, or whatever, is in no way a Ponzi scheme.”

“Hey, guess what? You know what I’m celebrating? My “I-think-I’m-way-smarter-than-my-mother” son leaving for college in the fall. So take that mister.”

“Yeah, I’m guessing Hallmark doesn’t make that card either,” he said smirking and then left me alone in the kitchen.

This interchange last year got me to thinking about graduation. I get why my son was experiencing what I would call graduation ennui. He has had a lot of graduations. There was a kindergarten commencement and let me just say this needs to stop. I get it, nothing is cuter than a 6-year-old in a mortar board (expect maybe a puppy in a mortar board), but come on, it’s silly. It’s more of photo-op than a celebration of achievement.

Then he had a fifth grade graduation which featured the aromatic styling’s of cafeteria fumes, mop water and a mystery odor (best guess is that it was a moldy Lunchable and Smuckers Uncrustable that had mated and were honeymooning behind the heat register) and a portable sound system with a reverb so intense that a couple of mothers had to leave due to impending migraines.

That event was surpassed by eighth grade graduation in the middle school gym. It had all pomp and circumstance of getting a wedgie. Sure, the middle school band and orchestra sounded great or at least I think they did. The sound of younger siblings running up and down the bleachers kind of drowned out the music.

Finally, when high school graduation rolls around kids are jaded. Just this week, my, now just finished his first year of college, son announced that he couldn’t understand why anyone would even go to their university graduation.

I answered that question for him. “Don’t see it so much as your graduation, but as a thank you ceremony to your father and I for surviving parenting you.”