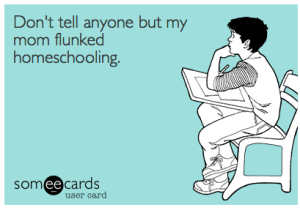 Someone please explain to me how several weeks ago it was “breaking news” that a 22-year-old woman is pregnant, especially a young woman with no job, no formal education, who lives in the Ozarks and is married to a teenage boy. Wouldn’t it be breaking news if she weren’t pregnant?

Okay, I’ll admit that Jessa Dugger (the expectant mother), whose sole claim to fame is that her mom, Michelle, has a very sturdy uterus and has birthed more than a dozen and half children, is a little bit of reality “star” from the TLC network show “19 Kids and Counting”. But come on, “breaking news” that she’s expecting a baby?

I get why people watch the Duggar’s TV show. I gave it a lookie loo primarily to witness a mother who has that many kids and chooses to homeschool them. I can’t imagine not wanting the euphoric relief of putting at least half of them on the school bus five days a week. If I were that mom the sweetest sound in the world would be the squeal of the school bus brakes as it stopped in front of my house.

Not that homeschooling doesn’t have its appeal. In the TV world homeschooling mamas attract viewers. You’ve got the Duggar Mom on TLC and that Pioneer lady on the Food Network.

In fact, it was fellow homeschooling mothers that helped propel the Pioneer Woman onto the radar of the Food Network. When I discovered that maybe one of the reasons she got a cooking show I felt better about the tastebuds of the world-at-large.

I have nothing against the Pioneer Woman. She seems delightful, but when your cooking show is so void of actual cooking (my theory is because everything she make seems to be based on an eight ounce jar of Ragu or a sleeve of Oreos) that the most consistent and oft-repeated camera shot is a close up of you washing your hands, well, you know you’re not really killing it in the kitchen.

I even feel a little bit guilty right now not having these two legendary homeschooling mothers’ backs. For you see, I was a homeschool mom. I’ll wait a second for you to stop laughing.

Here’s the quick back-story. My husband and I knew, sort of, that we would be moving soon and decided to not subject our then 12-year-old son to a junior high that had more lock downs than school assemblies. I was fully ready to assume the mantel of educator until my son empathetically told me, “I don’t want to get dumb so you better let me handle this.”

Homeschooling is not for the faint of heart. Forget about the pressure of making sure your kid isn’t an idiot the real drama is some of those homeschool moms. Talk about cliquey – yikes!

There’s the super holy “Jesus is the reason” group, and then there’s the “toxins in the classroom are killing our kids” group which overlaps the anti-vaxxers which has nothing on the “my kids are too smart to go to school because they were reading chapter books and I mean real ones not that Magic Tree House claptrap 11 weeks post womb.”

Once moms found out I was homeschooling it was like I was being rushed for a sorority. You know, until they found out I was the “our local junior high kind of stinks so we’re giving this a try until we move in a couple of months” mother.

The one thing all the moms did share were very intense emotions regarding homeschooling. A lot of them felt like it was their calling (and I love this and it means these women are far superior to me) which explains why they’ve rallied around and I’m guessing had a hand, due to sheer numbers, of propelling the “19 Kids and Counting” Mom and the “Pioneer Woman” to fame. This all leaves me a little disappointed in myself.

What if I had embraced homeschooling and instead of Snarky in the Suburbs was Harried & Homeschooling. Maybe I would have legions of followers or dare I dream my own cooking show. (I can see the camera close-ups of my hands already)

Maybe it’s not too late for me. I still have one kid in school, my 14-year-old daughter. What if I yanked her out of 9th grade and began a most wondrous mother and child journey of educational awakening and enrichment? I’m getting serious butterflies of excitement just thinking about it.

Wait, no scratch that, butterflies are gone, way gone.

Trapped 24/7 with a hormonal teenager whose mood swings are so turbulent some days I feel like I’m on riding shotgun on a tsunami. Yeah, that’s a great big no can do.

Not any amount of fame would be worth it for either of us. The only reality show that would come out of that would be When Mothers Go Cray – The True Life Tale of a “Yeah, I Thought Homeschooling Would Be Parenting Bliss” Mom.

Not that it wouldn’t be ratings gold.

14 thoughts on “I Got An F In Homeschooling”