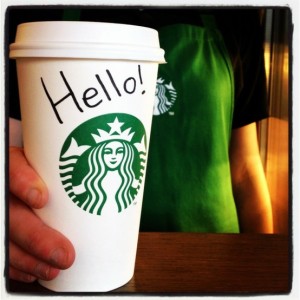 So there I was at Starbucks minding my own business, drinking an overpriced “shaken” ice tea. (Seriously, I think they charge an $1 extra just for the privilege of having your beverage get what amounts to a ten second hand job.) I sat there delaying going home because I knew what awaited me – teenagers and making dinner. Ugh. As I was pondering what I could cook this evening I noticed the two women next to me where getting into what sounded like an argument. Of course, I had to listen in.

There was one woman who seemed to be in her late 20’s early 30’s and was cute in an “I spend way too much time on my appearance” kind of way. She was the one who was angry. The other woman looked to be still in her 20’s and was rocking an extreme hipster vibe. Her top resembled a macramé plant hanger I made at Girl Scout camp about a hundred years ago.

At first their argument didn’t seem that intriguing. It was Over Groom complaining about her job, her bills and her lack of success in finding a husband. She seemed to be blaming Macramé for what sounded like a hot mess of a life. My ears perked up considerably when Miss Over Groom called Macramé her life coach. You can bet after hearing that I was all in.

From what I could gather Over Groom was ticked off about the advice her life coach had been giving her. Apparently, it wasn’t working. When Over Groom called Macramé out on her bad guidance it got good.

Macramé said her advice would work if Over Groom would “surrender to it.” This is when I scooted my chair in closer. Over Groom called “bull shit” on that pretty loudly and this caused Macramé to go into what looked like a trance. This made Over Groom go cray. She took the palm of her hand and hit the table. Macramé snapped out of her trance and then told Over Groom that she had “hostility issues.” Over Groom said, “Yeah because I paid you a lot and got nothing.”

I had been trying to stay out of if. I was biting my straw, my lip, anything to keep my mouth shut. But try as I might I just couldn’t be quiet and mind my own business. There were so many things that needed addressed – like how a girl in her 20’s could call herself a life coach. Don’t you need to have more than two decades of life under your belt before you can coach it? And anyone that wears a top that ugly and see through obviously shouldn’t be coaching anyone about anything.

As for Over Groom, hadn’t she heard of buyer beware? Why did someone who probably spends at least 15 minutes a day just on eyebrow maintenance think a chick like Macramé would be able to help her navigate life’s turbulent waters? And even more important how much did this life coach gig pay? I’m always looking for some extra freelance work.

It was easy to insert myself into their argument. If you call easy just plain old butting in. I, without a how do you do? Or pardon me; ask Macramé, “So, you’re a life coach?”

This catches her off guard and she gives me a superior look as she corrects me and says she’s “technically a life healer.” Well, my friends my day has just been made and I now have scooted my chair all the way up to their table.

“Life healer, really?” I ask. Do you go to school for that?”

Of course she did – on the Internet. I then turn my attention to Over Groom and ask how she met her life healer. If you guessed at yoga class give yourself a gold star because you are correct.

Over Groom has grown impatient with my Q&A and unsuccessfully attempts to disengage me from their fight/conversation. I won’t budge. Instead I offer unsolicited advice. I tell Macramé that calling herself a life healer carries with it some pretty big responsibility and that she should be prepared for her paying clients to want significant results.

I then look at Over Groom and admit I had been listening to her problems and suggest she shop less, work more and that her goal to “get married and then do nothing” is fraught with peril. I channel my mother and tell her no man of quality (that’s my mom talking) will be attracted to a woman who cites “doing nothing” as her primary life ambition.

I knew I had pissed both of them off so as I’m saying that last part I’ve grabbed my purse from my lap and I’m standing. Over Groom tells me I’m “mean” and Macramé has tears in her eyes. I couldn’t resist so I tell her, “there’s no crying in life healing.”

I’m not sure but I think both of them then shot me the bird. For sure, Over Groom did and I know Macramé gave me some sort of finger, maybe it was the international life healer symbol for thank you. Whatever, I’m just glad I could make a difference in two young women’s lives.

**For more Snarky check out my book  Snarky in the Suburbs Back to School.

Here’s a little ditty about it: The Spring Creek Elementary School PTA board (a coven of Mean Moms dressed in Uggs, yoga pants, and dermal filler) is up to no good. Wynn Butler (middle-aged, uncool, and not bringing sexy back) is determined to find out what’s going on. With help from her two kids, a Roomba vacuum turned mobile surveillance drone, and a few good friends, Wynn launches a covert investigation that leads to the “mother of all revenge capers” at the school’s annual Fall Festival. If you’ve ever fantasized about smoke bombing the idiot parent who has yet to master the fine art of the school drop-off lane, or standing up and shouting, “Liar, liar, Botox on fire” during a PTA meeting, then this delicious tale of payback is for you.

To stay up-to-date on new posts and take part in my not so deep thoughts click on this Facebook link – http://is.gd/iEgnJ (That’s the abbreviated link to my FB page) or I twitter @snarkynsuburbs.