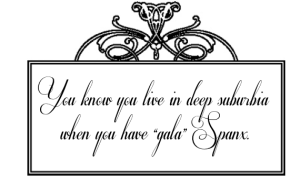 I got four invitations in the mail this week: Two are fund-raising luncheons, one is a gala and the last one requests the pleasure of my company for a “we’re going to honor someone really awesome in the community to raise money so please pay $150 and come join us in the celebration.”
Let’s be honest here. Does anyone really have an amazing time at a charity fund-raiser? OK, maybe ‘amazing’ is asking too much, so let me rephrase that. Does anyone have their allocated tax deduction worth of fun? Yes, yes, yes, I know you are attending to support a non-profit you believe in and it’s all about the cause, not about having a good time. BUT, I would argue that the event shouldn’t be painful — as in tedious, boring and resplendent with long-winded well-meaning speakers — and if it is, then by God there better be a hosted bar. I’m not going to name names (but the worst offender starts with a Ch and ends with amber) primarily because I don’t want to be run out-of-town. But what I will do is offer some sage advice.
The first piece of wisdom I have to impart is if I walk into any event and see a Powerpoint I’m leaving. Correction: First I’m getting a drink and then I’m leaving. Nowhere in the annals of gracious entertaining does it say to torture your guests with a Powerpoint. I don’t care if it’s a Powerpoint worthy of an Academy Award nomination, it’s a deal breaker. Am I the only one that’s ever wanted to rush the stage and abscond with the presenter’s laptop?
Also, and this is going to hurt a bit, a big no to choirs, high school singers, concerts. Really any kind of children’s performance should be verboten. Harsh? Yes. But, consider the fact that, I, as a mother, and most of the other parents attending fundraisers, get weary (gasp) of seeing even our own precious, precocious children perform at their countless school musicals and concerts. Sadly, we have reached our kid performance threshold. And even if the event is an entertainer-free zone, by no means does that call for the blaring of music so loud it makes having a conversation impossible and renders the guests to talk in party sign language where the only form of communication is pointing at the red or white wine on the table. Remember, most of us are 40-plus and our hearing is not what it used to be.
Most importantly, people speaking at the podium should be on a timer, a really big timer like the ones at swim meets, and it should have a buzzer. I’m aware the non-profit CEO, event host or honoree wants to be sure to thank everyone, but save the list of names for the program or your obituary. Ouch, how mean. But you know I’m right. Oh and if anyone goes on and on effusively thanking their spouse for 20 minutes, two words for you: Red Flag. Something’s going on in that marriage and it’s not good. Any happily married person does not feel the need to smother their spouse with a half hour of ooey gooey praise in public.
Okay, I just lied, there is something even more important than the timer. It’s the on site fund-raising or as it’s called on the mean streets of Non Profitville — the cash shake down. This is the asking for a monetary donation that goes above and beyond the price of your ticket, and it should be handled in a discreet and dignified manner. Sure, we all love when the live auction gets crazy and someone pays $15,000 for a trip to the Flint Hills, but the whole shout out to the audience, also known as the “Fund A Need” ask, should not start at upwards of $50,000 and oh so s-l-o-w-l-y work its way down to $5. Worse if while this is going on the hosted bar gets shut down. That’s bad form. Or as my mother would say, IJND: It’s just not done.
***For all things wonderfully Snarky go to www.snarkygear.com where you can find the new winter Snarky line of clothing and accessories. (Flannel Snarky P.J.’s anyone?) Plus, there’s my book – Snarky in the Suburbs Back to School. (Click here for purchase information.)

Here’s a little ditty about it: The Spring Creek Elementary School PTA board (a coven of Mean Moms dressed in Uggs, yoga pants, and dermal filler) is up to no good.  Wynn Butler (middle-aged, uncool, and not bringing sexy back) is determined to find out what’s going on. With help from her two kids, a Roomba vacuum turned mobile surveillance drone, and a few good friends, Wynn launches a covert investigation that leads to the “mother of all revenge capers” at the school’s annual Fall Festival.  If you’ve ever fantasized about smoke bombing the idiot parent who has yet to master the fine art of the school drop-off lane, or standing up and shouting, “Liar, liar, Botox on fire” during a PTA meeting, then this delicious tale of payback is for you. To stay up-to-date on new posts and take part in my not so deep thoughts click on this Facebook link – http://is.gd/iEgnJ (That’s the abbreviated link to my FB page) or I twitter @snarkynsuburbs.