I have been an elementary school Field Day volunteer for a decade. Those 10 long years have honed my skills to the point w 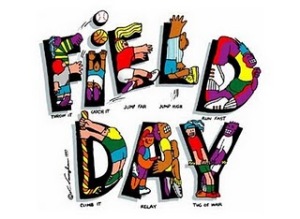 here I consider myself the Yoda of Field Day.

So, if your child’s school has a Field Day right around the corner I urge you for your own personal safety and mental well-being to carry this handy checklist with you. I would even go so far as to suggest laminating it and digging in your kitchen junk drawer for that overpriced Disney World lanyard from your 2009 summer vacation and wearing this vital information around your neck for easy access because in Yoda speak, “Much to learn, you still have.”

Deal with the Dad Factor – Field Day is traditionally known as a dad friendly event. Usually it has even has a dad as the Field Day chairperson. This is a mistake.Yes, I know dads are awesome and do many incredible things, sadly, Field Day is not one of them.

Your typical male doesn’t have the brain wiring that gives him the ability to juggle and herd children into activities that must appeal to ages 5 thru 12. The Field Day dad plans an event that would be fun for him – the adult male child. While a pack of 5th and 6th grade boys  are having the time of their life you’ll have kindergartens and 1st graders wailing because they keep on getting hit in the face during a combative water balloon toss.

Take a breath moms who are reading this and getting very upset that I dare to mention that a dad can’t handle running a Field Day. I know you’re thinking that I’m wrong based on all the dads that coach sports.

I’ll agree that dad’s are super soccer coaches but ask yourself this question – would they be so super coaching soccer with a team of 476 kids aged 5 to 12? No, is the answer to that question. I will admit there are probably a smattering a fathers who could accomplish this task all while running a multinational corporation, doing brain surgery via their iPad and updating their Facebook status. But, for the most part Field Day needs a mom’s touch. Any dad Field Day chairperson without his wife doing a majority of the heavy lifting is doomed.

Control the Competitive, Select, Elite Sports Parents – Because Field Day is resplendent with fathers coming out to volunteer or cheer on their child you will unfortunately have to deal with the super jock parent.

This is the parent who pays thousands of dollars for the privilege of having their athletically gifted five-year-old participate in some sort of select, elite, or competitive sport be it soccer, baseball etc. This dad has a problem dialing down his adrenaline for a school event that features kids of assorted athletic talents.

I had the “honor” of volunteering with one “Elite Dad” at a Field Day last year. We were both working at the Frisbee Tag station. Because a dad was the Field Day chairman Frisbee Tag was more like a Frisbee Assault.

Kids were divided into teams and when a whistle blew they raced to pick up Frisbees and hurl them at their opponents. Once you get hit, you’re out. The team with the most kids standing after 5 minutes wins. Imagine the cries, the shrieks, the howls, when kids would get hit hard in the face with the Frisbee, especially the kids with braces. I had to set up a triage area to deal with the injuries and was using Capri Suns as ice packs.

After just one 5 minute game at the “Frisbee Tag” station I told the dad we needed to call an audible and change things up by having the kids toss the Frisbees in a distance contest not a W.M.D. attack.

He said, “No way! These kids have to learn to take it.  Don’t p*ssy out on me.”  Really, the p word on an elementary school playground?  I despise the p word. The Elite dad was on a roll and suggested I hit him with a Frisbee so he could prove how harmless the game is.

There are times, my friends, when I loathe my stature, my size 11 feet and the fact that I can fill out the shoulders of a men’s large dress shirt. This was not one of them. I was confident that the younger sister of 2 very big brothers could take out the “Elite Dad.”

I hesitated in agreeing to pelt him with a Frisbee. He egged me on and even offered me three chances to hit him. “Well, okay,” I said in my best wimp voice, “I’ll try.”

I did more than try. I took that Frisbee and aimed it for his nose. That’s your money shot. If you throw the Frisbee just right it will hit straight across the nostrils and then you’ve got yourself a real bloody mess. ( My brothers taught me that move.) I aimed the Frisbee and in my first try got me a Bulls-eye! The Elite Dad was a real bleeder and kind of put the p in ussy. He spent the rest of Field Day with his head elevated on a cooler and a fistful of paper towels from the cafeteria shoved up his nose.

Minimize Moms on the Prowl – Field Day because of the outdoor venue lends itself to a less is more dress code. It’s here where you’ll find your hot elementary school moms working the extended playground like it’s their little corner of Skank Street. It’s a cleavage cornucopia and peek-a-boo butt cheek paradise.

Some moms pretend like they’re not shopping their goods by wearing “athletic wear.” My current favorite is the bedazzled tennis dress with the extreme push up bra that acts as a nipple platter and is so short you can see the continent of crotch. Because I’m just a smidgen jealous that my breast can’t multi-task, in the event of an emergency, as rescue rafts, two years ago I came up with a plan to lessen the Field Day booty call.

When the hot moms check in at the volunteer station I hand out t-shirts for them to wear. Big, ugly, mens XXL Dollar Store t-shirts. I tell them they have to wear them so it’s easy to spot the volunteers. Of course, they try to tie them, tuck them, or use their daughter’s pony tail holders to twist them into a tight t-shirt, but nothing really works. They’re stuck in huge, gross 70% polyester t-shirts. If loving making these women wear extra large t-shirts is wrong then I don’t want to be right.

Beware All Parent Participation in Any Competitions –  Back when I started my Field Day career, 10 years ago, it was the 6th grade students who played the teachers in kickball. That somehow, over the years, segued into parents playing the teachers. In the last couple of years you now have Dads vs. the Faculty. Not good. Not good at all.

Because it seems the dads that rush the field all suffer from penile implants that didn’t take. Here they are trying to crush a bunch of teachers whose median age is 49 in kickball. Do they really think an elementary school playground is where they should be showing off their take no prisoners sports philosophy? More importantly, do these men not realize the long reach of a teacher.They have ways of making your kid pay for the ball you kicked right in their face.

Hey, doofus dads – let the teachers win. They put up with your kids all day. Trust me, they deserve the W.

Ban Water Ballooning as a Sporting Event –  My dislike of water balloons at a Field Day is three-fold. First, you’ve got girls in the 6th grade that are mortified to walk around in a wet t-shirt. (Proving they have more sense than some of the moms.)  Secondly, the immediate fun of getting wet soon sours when you have 400 plus kids spending the rest of the school day in damp clothes and soggy sneakers. Sure, their clothes may dry out, but the sneakers -they’re squishy, squashy all day. Thirdly and this is my personal pet peeve  – you get all the frisky moms and dads overly excited.

They love pelting each other with water balloons and traditionally this is where you’ll have the hottest parents asking to volunteer. In a couple of minutes they have been known to use up most of the supply of Field Day water balloons. They run around, chasing each other and screaming as they lob balloon after balloon.

Without fail you get a dad who thinks he’s hilarious and puts a couple of water balloons up his shirt and like summer follows spring the dads always aim their balloons at the hot moms chests.

One year, in an effort, to curtail the overactive libido of the balloon parents I hatched a little plan. Now, I will tell you to proceed with caution before you engage in this kind of maneuver. I undertook the dangerous mission only because I had a superior exit strategy. My house was already under contract and my family was moving two days after the school year ended.

Here’s how it went down. All the parents are asked to bring water balloons up to school in a cooler for the balloon toss. I brought my balloons except they had something a little special in them – liquid fart. My son had gotten this disgusting gift from my sister (who kind of hates me) I took the fart juice mixed it with water and just because it wasn’t noxious enough added in a little vinegar. I then filled my balloons with the fart juice mix and put them in a nondescript white styrofoam cooler.

When the balloon parents got all giggly and flirty and started running around throwing balloons at each other I took my cooler over and said, “Here’s more balloons for the toss!” and then quickly got out of the line of fire. The parents reached into the coolers, grabbed the balloons and started flinging them at each other and the putrid smell, much like a thousand filled to the brim porta potties left out in the sun to fester, overwhelmed the balloon area.

The sexy parents screamed, swore and in a couple of cases wept. Of course, the parents immediately had to evacuate the premises to go home and attempt to shower off the yuck. I’m told one woman even had to get her hair extensions removed because the smell wouldn’t wash out of her fake do. Oops, sorry – not.  FYI – It was never traced back to me and to this day is considered some kind of prank concocted by sixth grade boys.

Follow these 5 tips and I can ensure you, on my honor as a mother, that you will have an enhanced Field Day experience. In the words of Yoda – May the Force Be With You and if not the force then you can always pray for rain.