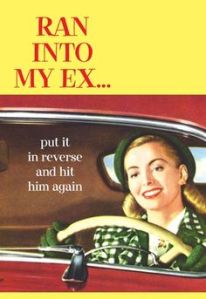 I want a divorce. Really, really badly and right now. Here’s why. Sunday I’m at the grocery store and see a “sort of” friend in the cereal aisle. At first I don’t recognize her. I walk by the Cap N Crunch and do a double take. Holy crap, is that really Claire, I think to myself, she looks incredible.

I stop and say, “Claire is that you? You look amazing.”  She laughs and say that yes, indeed, it is her.  I immediately go for it and say, “Okay, tell me everything you did, done and are currently doing to look so great.”

She keeps on laughing and says, “Well, first I went on the divorce diet.”

“Oh,” I respond and then apologize for not knowing about that slice of hell she had just gone through.

She laughs again and says, “Do not apologize it was the best thing that ever happened to me.”

Claire with some “gentle” coaxing from me begins to dish the dirt on her divorce. It was the typical 21st century geek gone glam story. Claire and her husband had met in college. They were both math nerds and very well suited to each other. They married, had kids, their company invents something that is the current high tech du jour and he goes from geek to glam. The nerd became a hottie and Claire was no longer hot enough for him. (I’m all for revenge of the nerds and I’m on Team Geek. But, what I don’t like is when Team Geek doesn’t stick together.)

But, according to Claire that’s not the best part. Her absolutely favorite thing about being divorced is that her husband is now court mandated to spend time with his children. Claire has three kids all under the age of seven. Before the divorce her workaholic husband almost never spent anytime with the kids. Now, he picks them up every Wednesday and she’s a free woman every other weekend from Friday at 5 p.m. to Sunday at 8 p.m. Claire says as soon as the kids leave on Friday she gets into her pajamas and watches all her DVR’d shows from the week. On Saturday, she treats herself to lunch out and reads all day long.  On Sunday, she sleeps in and then goes to see two movies.

She had me at two movies. (She almost had me at in her p.j.’s at 5 p.m.) I can’t even began to imagine the luxury of seeing two movies in a row.  By this time I was perilously close to flying into a jealous rage.  Here’s this woman that’s gone from frumpy to fab and she’s got free time every other freaking weekend. By God, that does it. I want a divorce.  Just as soon as I get home, unload the groceries, and put away the perishables I’m going to tell my husband that we should get a divorce because we would both would end up so much more, well, I don’t know, more than we are now.

Of course, as I drove home my divorce buzz wore off. In reality if I wanted a divorce my husband and I, after looking at our finances, would realize that yes, we could get a divorce but we would still have to live together because we couldn’t afford two separate homes and/or apartments. Basically our divorce would be kid sharing roommates with one of us sleeping on the couch and leaving notes in the refrigerator saying “don’t eat my food.”

As I got closer to home I begun to imagine my perfect divorce scenario. The kind of divorce I would want if my husband ever decided to re-imagine his life without me. No, I would not go quietly into that dark, cold night. I would seek revenge or if that didn’t work hope for a Divorce Fairy Godmother. Some being who could wave a magic wand and presto my financial situation improves post divorce. Some relative, (maybe a man hating spinster great-aunt) unbeknownst to me, has set up a divorce trust fund that would leave me living large.

My Fairy Godmother would also ensure that some of my wifely powers would stay intact. This includes the power to interrupt any meeting my husband is in with a single phone call, the ability to tag along on any cool business trips, and the ability to guilt my husband into doing all house/yard work I considered “dude” related.

I would most definitely want my husband forced to live in super crappy apartment with a freezer that hasn’t been defrosted since the Reagan administration and a shower infested with a Tilex resistant strain of mildew that would render him impotent.

Most of all I would want my husband to date. That’s right I said date. My Divorce Fairy Godmother would make sure he was subjected to a dating pool that would include the seven dim wits. Whiny, Bitchy, Pack Ratty, Starvey, Fakey, No Funny and worst of all Helpless.

Whiny would be his debut divorce date. Nothing would be good enough for her.It would make him so appreciate my legendary (practical) ability to make the best of any situation. She would carp endlessly the entire date about his car, the food, the restaurant service etc.

Bitchy would be his next date. She would offer a critique of his bedside manner that would leave him permanently “unable to perform”. “Really,” he would say, “It’s not my fault. It’s the shower mildew!”

Pack Ratty would invite him to her house where my husband, the neat freak and man who has never met a hand sanitizer he didn’t like, would be assaulted by years of jumbo clutter and a vintage kitty litter box falling on his head rendering him unconscious. His only memory – me – being awesome.

Starvey would be the date that doesn’t eat and can’t cook. As much as men say they like a super skinny chick (not that my husband has once ever said that) I imagine dating one would make you hungry and cranky. What guy wants to eat while his date just sips water with lemon?  At first, I can see a dude saying, “Hey, this woman will save me money. She doesn’t eat.”  But, eating solo while your date just stares at your plate  would start to get old pretty quick.

Fakey, would be the embodiment of every guy’s dreams. She would look amazing until he touched her breast and it was hard as a rock from silicone gone bad. Also, the combination of her spray tan and vajazzle glitter rubbing off on his privates would cause a heinous allergic reaction that would just stop short of a double ball amputation.

No Funny wouldn’t get any of his jokes or understand his sense of humor. This is a man who has the benefit of me laughing at his humor almost everyday of our marriage. He’s used to a receptive audience. (He is really funny in that dry wit kind of way.) No Funny would stare at him all night and finally at the end of the date ask him if he was mentally off or mixing his medications.

Helpless would be the date that would finally do him in. After years of having a wife that lives to take charge, a wife who prides herself on never having to utter the phrase, “I’ll have to ask my husband,”(unless, of course, I’m using it as an excuse to get out of something) he would be terrorized by a girlfriend that could nothing for herself. She would cling to him and require his manly assistance in any endeavor. This would be the thing that would stroke him out.

My perfect divorce scenario concludes with my husband, a broken man, showing up at my house, with big, sloppy tears oozing out of his eyes and surgical bandaids on his privates, what with the whole ball amputation thing, begging me to take him back. He would admit that he was a fool and I, the essence of perfection. I would pat his head, offer him a roll of generic toilet paper to dry his tears and say, “You’re welcome to come mow the yard or organize the basement anytime.” I would then close my front door accidentally on purpose on both of his hands.

That would be my bestest divorce ever.

tion Snarky Friends I have a new book out and for a limited time only it’s just 99 cents for a heaping helping of Snark! You are now gazing at the second book in the Snarky in the Suburbs series – Snarky in the Suburbs Trouble In Texas. You can buy it for your Kindle or in paperback on Amazon.  It’s also available for the Nook or you can get it for your Kobo reader. Click on a link and give it a test read.  I hope you like it! 🙂