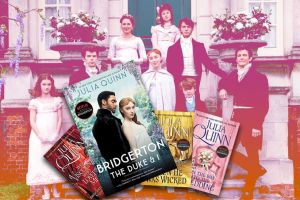 Shh. I have a secret. It’s a big one. In fact, no one outside my family knows it. But due to current circumstances I finally feel safe enough to reveal what I have kept hidden for so long.

Are you ready? Because here it comes. I read romance novels. Specifically, Regency romance novels which means books that are set in England between 1811 to 1820.

Now a mere month ago I wouldn’t feel comfortable sharing this information. Women who read romance novels are usually incorrectly categorized as lonely frumps with an addiction to cats and single serving frozen dinners.

But since the Netflix series “Bridgerton” based on the Regency romance book series by Julia Quinn debuted on Christmas day and became the streaming service’s biggest series e-v-e-r (82 million streams and counting) I feel it’s now safe for me to come out of my mahogany gilded closet.

I’d could lie and tell you that I started reading these novels because I became obsessed with the writings of Jane Austen and then segued to romance books as a way to fill my Regency time period fiction void. This would be a strategic way to explain my romance novel leanings because it would cleanse, even legitimize my reading preferences by making it born out of love for Jane Austen thus giving my choice of fiction some gravitas.

But truth be told, back in the 90s I picked up my first Regency romance novel (by the incomparable Stephanie Laurens) on a whim from a Los Angeles library shelf and became besotted.

Now if you think these novels are mostly a lame plot worked around debauchery in the ballroom you couldn’t be more wrong. The best romance novels have humor, a mystery to solve and most always explore how women negotiated a time period where marriage determined their very survival.

Romance writers are also no slouches in the brain game. Some of the authors of these most delicious reads also have backgrounds in science. Julia Quinn of Netflix’s “Bridgerton” fame was a Yale med student before she decided to drop out and write romance novels full time. And Stephanie Laurens, my first love, was a scientist in cancer gene research.

Ugh. Did you see what I just did there? I was trying to defend romance novels. It’s because years of hiding my affection for this genre have made it hard for me to just say I adore them without first offering up a veritable platter of justifications.

There were times on airplanes where I would hide my novels in the pink pages of the Financial Times and read them surreptitiously so no one would notice the often déclassé book covers. One time a gentleman seated next to me remarked on my reading the Financial Times and a romance novel and I looked at him and replied, “What can I say? I’m complicated.”

But dear readers I have saved the best confession for last. I have a Regency romance room in my house. Yes, I took a small room full of bookshelves and turned into a repository for all my novels.

Here, while ensconced in a Regency color inspired pink and lilac toile sofa I allow myself the pleasure of reading the works of brilliant authors in a vastly underappreciated genre. To the 82 million plus people that watched “Bridgerton” and now are hooked on romance I say welcome.

All works on this blog are available under Creative Commons Attribution-Non Commercial-No Derivatives license. You are free to share and repost the content on this blog but only if you give credit to Snarky in the Suburbs.
Loading Comments...
Comment
×