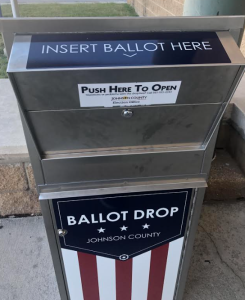 It’s election day. If you want some keen insight on politics I’m not that person. What I do know is that I have never been more nervous about voting in my entire life.

I was the voting Sherpa for my entire family. My daughter got the worst of it because she was the farthest away. As a college student in California I was in turbo nag mode about voting. Starting on October 14 I sent her the same five-word text at least twice a day – “Have you gotten your ballot?”

When her ballot finally arrived, I made her Facetime me as she opened it. The sighing over that request was fairly intense.

She then switched to groaning while I stressed that she needed to be sure to vote the entire ballot. I know she was thinking that this was 10 minutes of her life she wouldn’t ever get back but a civics lesson on how the decisions you make down the ballot can be just as influential in your daily life as who you select as president was essential.

I also stressed that she must follow the instructions very carefully so her ballot wouldn’t get bounced due to a lack of signature or something else easily avoidable. I would have talked to her more but she said I was scaring her with my “election smothering.” Then the Facetime call “dropped.”

Yes, I know she hung up on me. So, to respect her voting privacy I gave her 20 minutes to get the job done then texted her to go to the Post Office, buy some stamps, and get that bad boy in the mail – pronto.

This is when I got scared for civilization in general. My 20-year-old daughter laughed and told me she had never bought stamps before. Dear God, help us all.

In the midst of all this with my daughter my son decided to pile on and share that he got a letter that his application for an advanced ballot got flagged due to the signatures on file not matching.

Seriously, what fresh hell is this? I asked him how his signatures could have been different. It’s not like he’s suddenly gone from writing with his right hand to his left.

He looked at me like I was a raving lunatic, granted I’m fairly certain I probably had some impressive crazy eyes going on, and very nonchalantly said, “I don’t know Mom. It’s not like I think about my penmanship on a daily basis. I just signed my name.”

Fortunately, he had worked it out and had gotten his ballot. I asked him why he didn’t lead with that newsflash and he told me, “Where’s the fun in that?”

I then might have overstepped my parenting boundaries when I asked him to please text me a picture of him dropping off his ballot. Sadly, he declined my request.

Thankfully my husband filled out his advanced ballot quickly. This meant I was almost to the voting finish line. All I had to do was take care of my ballot and then proceed to the Blue Valley Library official drop box.

Well, a funny thing happened on the way to that drop box. I spilled an entire large McDonald’s Diet Coke on my ballot. Yep, my ballot was ruined with soda and then my tears.

Thankfully, less than a week later I got my new ballot and was able to drop it off without incident.

All I ask of you right now is to never tell my children that I’m the one in the family who was the 2020 “problem voter.”