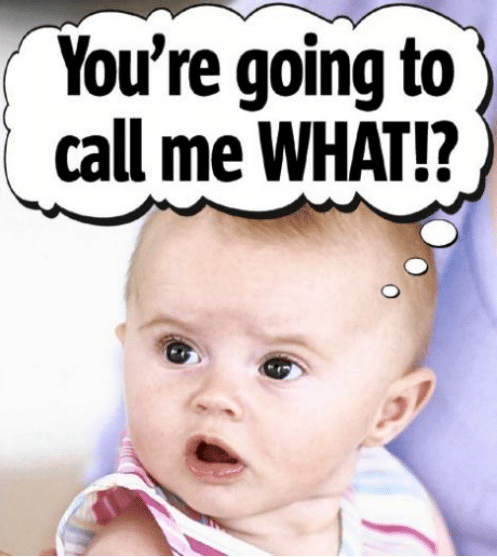 I’m pregnant with my first baby and it’s going to be a girl. I’m very excited but I’m in the middle of a baby naming nightmare with my husband.

He wants to name the baby after his mother and it just so happens that her name is the same as his former fiancée – Caroline.

I’m having a real problem with that because who wants their daughter with the same name of a woman your husband was engaged to for three years and dated for almost a decade? It’s just weird and yet my husband thinks I’m being childish because it’s about his mom not his former fiancée.

I totally understand that it’s about honoring his mother, but I still don’t want to give my daughter the same name as my husband’s almost wife. It makes me very uncomfortable, and I think my feelings on this should be respected.

I need some backup on this which is why I wrote to you. I’m hoping you don’t think I’m being unreasonable.

I’m going to give you an answer that will make you feel better. In absolutely no universe are you being “childish” or “unreasonable.”

There is no way I would have ever given my daughter the name of one of my husband’s former girlfriends and hell to the no on the same name of someone he was engaged to. I wouldn’t have cared if it was also his mom’s name. It still wouldn’t have happened.

Now I know that some people are going to suggest you could go ahead and name your daughter Caroline and call her Caro or use her middle name but just no on that. This is your child and each parent should have full veto rights on a name they don’t like.

As for your mother-in-law, does she even know that your husband wants to name the baby after her? If the answer is yes, then I’m going to suggest that there are other ways to honor her. Perhaps you could use your mother-in-law’s maiden name as a middle name for your daughter.

But for the love of all that is holy, stand firm in taking a hard pass on the name. Honestly, it doesn’t matter if anyone thinks it’s an “unreasonable request” there are millions of names you can choose for your child so tell your husband to suggest another one.

😳 If you have a question, an issue, or a dilemma I’m here for you. Send me an email at snarkyinthesuburbs@gmail.com