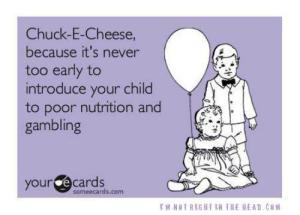 *After watching the season finale of The Real Housewives of Orange County  (Go ahead and judge.  I deserve your scorn) and being held hostage at Chuck E Cheese for three hours – ground zero for any E. Coli outbreaks, rouge flesh-eating viruses, antibiotic resistant staff infections and the future birth place of a worldwide Zombie attack plus the headquarters  for the Crappiest Moms on the Earth Award Ceremony – I did a full body Purell and wrote this. Thanks to my Snarky FB friends for their housewife name suggestions.

Fierce, fabulous and frightening The Real Housewives of Chuck E Cheese gives you a glimpse into the gritty, yet oh so girly world of five women who know how to take that fork from the salad bar and make it into a first class prison shiv. So, don’t get in front of them at the token machine or really even make eye contact. For these ladies shanking is a form of artistic expression. Join them in their journey as they try to have it all and juggle the demands of being a common law wife, mother, exotic dancer and/or gentlemen’s club hostess. The Real Housewives of Chuck E Cheese will take you inside their homes. Forget about the gated communities of Orange County or the Italian themed McMansions in New Jersey. That was so early 2000’s. These housewives experience the heavily armed community of meth dealers where the only Home Owners Association rules are no generic aluminum foil on your windows. It’s Reynold’s Wrap all the way. There’s also the whirlwind glamour of trailer parks favored by only the most discerning tornadoes and living large in a “vintage” 1984 Econoline Van.

Let’s meet three of our housewives. The other two had previous commitments one with her probation officers. The other at an STD clinic.

“Hi, y’all I’m Clitoria Cummings. Go ahead look at me. Drink it all in. I know your eyes are on my boobies. No, they are not real. My step-daddy got em for me so I could make more money working the pole at his club the Meow Factory. Yeah, I know they’re a little crooked. Okay, a whole lot crooked, but you know they were on sale, clearance really. They’re irregulars and a non doctor put them in. It’s like he was a doctor and then something happened and he wasn’t a doctor. He could be in jail for all I know.   don’t really remember. I just love my big boobies and I don’t care if they’re a little lopsided. I mean my blonde hair’s not real either, but who’s complaining? Not me. A day don’t go by that someone doesn’t tell that I look like Pamela Anderson. So, I’ve got one word for you – Jealous. Now, you’ve gotta meet my babies. They’re twins. Come here girls, right now get out of that ball pit. Here come my darlings. Everyone meet Vajazzle and Bedazzle. They’re four and just precious, precious little angels. Yeah, I’ve bleached their hair so it matches mine. It’s Clariol Beach Blonde in case you want to copy us. I hear that’s what Lady Gaga uses. My first choice for a show to be on was Toddlers and Tiara’s, but they didn’t’ pick us. Their loss. So, here we are at the Real Housewives and that’s okay. We’ll just work our way to that Tiara show. I’m all about having goals and that’s what makes me better than most.”

“Shut up Clitoria!  Let someone else get a word in. Hi, I’m Sh’Dynasty, It’s French and pronounced like Shady Nasty and I’m good with that. Most peps just call me Nasty and it works. I’ve got it going on all, girl. Forget looking like Pamela Anderson, isn’t she like 100 by now? I’m a combination of J.Lo and J. Wow which makes me a Nasty Low or Nasty Wow. I haven’t really figured out how that’s going to work, but whatever you call me I’m all that. I can’t help it. Just like I can’t help it that I have four boys by four different baby daddies. That happens when the good Lord puts you on earth to make men horny. Hey, I see you staring at me. Are you looking at me and trying to think we’re you’ve seen me before? Bam!  I was on 16 and Pregnant about five years ago. I was just on a little bit cause I ‘beat up’ my boyfriend, like slapping him upside the head is soo bad. I still can’t believe his mama called the cops. Well, when that happened I got sent to a teen jail and had to take anger management classes. He should have been made to go to “man up” classes. What a baby. A tiny, tiny mama’s boy. Good thing I don’t see him anymore. I just cash his checks that his mama has to sign because he’s a ‘No Money Honey’.”

“Boys, come here! Quit taking people’s tokens, okay take just a few more and get over here and two of you go sneeze on the pizza. Mama wants it and that woman sitting there with a stick up her butt and that Purell on her table will not take one bite of it if you boys go sneeze on it. Good job!  Now say hi to the camera. These two, right here, F-150 and Denali, are my oldest and then I’ve got me two more sons Ford Ranger and Durango. The little ones came about from conjugal visits, if you can believe that. At first, I thought a conjugal visit or a “conjee,” that’s what we girls call them, would be amazing, something to brag about with your friends, like ‘I had me an awesome congee.’  So, not awesome. I was all excited and used my mandarin orange twilight thunder musk body lotion and got a spray tan with a coupon I had been saving and it was a big waste. They take you to this room and before you can say, ‘Yuck, that orange prison jumpsuit is so not your color,’ he was done.  Really, I’ve had sneezes that had lasted longer, if you know what I mean. But, I’m lucky. I have my four boys and I did me an  Angelina Jolie. I went and got a tattoo for each baby. Look, can you see’em? If I had known I’d be having this many kids I would have started the first one higher up on my back cause if I have any more there are gonna be tats on my butt crack. Which wouldn’t be that bad. It’s a look I could definitely pull off.”

“Oh yeah, Nasty keep on telling yourself that meanwhile your back fat makes almost two of your kid’s names disappear. Hi there, I’m Crystal Chandra Lear and I’m a star –  almost.  I just got me an agent. He works in the adult romantical film business and I’m feeling confident that my career is about to take off. Yeah, I know Clitora thinks her stuff don’t stink because she’s the headliner at the Meow Factory. But, let me tell you something with those weird boobs of hers she’s a freak show. When she hangs upside down on the pole those things don’t even move, not a jiggle. There’s a reason us girls call those puppies the ‘Rocky Mountains’. I’ve felt concrete that was softer. Hell, I’ve seen parking lots softer and smaller than those things. My agent told me in today’s business it’s all about reality. People want to see real things. Those boobies So. Not. Real.

In case you’re wondering why I kinda look like Nasty we’re sisters except I’m the hot sister, but you know that cause you’re looking at me now thinking yeah, she’s hot, smokin hot. Nasty just hasn’t accepted that yet. I’ve got two kids, a boy and a girl and I didn’t bring them to Chuckie’s today. I’m working. This is work for me and when it’s work time I don’t want no kids around touching me, messing up hair or nothing. My sister and I share a husband, not like he’s married to both of us or anything because that would be creepy, but I had him first and then I threw him out after he blew up our trailer cooking meth and then my sister, because she’s always wants what I have even if it’s a leftover, took him in. Now, our kids are half sisters and brothers and cousins. I guess that’s what you call a bonus. Neither of us are with him now because after the trailer blew up he needed some money and went and done volunteered himself for one of those drug company trial experiments. He got himself what they call a penile implant and according to the doctors it didn’t take. It kind of made him all shrinky, all the time and he didn’t have that much to work with in the first place. I feel sorry for him. I really do, but I don’t have time for a half man when I’m all woman.”

The drama of the Dollar Store, the agony of a corrective tramp stamp procedure, the science of in breeding. You won’t be able to get enough of The Real Housewives of Chuck E Cheese. Bravo’s classiest housewives yet. Check your local listings for dates and times.

For all thinks wonderfully Snarky go to www.snarkygear.com where you can find T-shirts, ecards for Facebook and my brand new book – Snarky in the Suburbs Back to School.  Here’s a little ditty about it:

The Spring Creek Elementary School PTA board (a coven of Mean Moms dressed in Uggs, yoga pants, and dermal filler) is up to no good.  Wynn Butler (middle-aged, uncool, and not bringing sexy back) is determined to find out what’s going on. With help from her two kids, a Roomba vacuum turned mobile surveillance drone, and a few good friends, Wynn launches a covert investigation that leads to the “mother of all revenge capers” at the school’s annual Fall Festival.

If you’ve ever fantasized about smoke bombing the idiot parent who has yet to master the fine art of the school drop-off lane, or standing up and shouting, “Liar, liar, Botox on fire” during a PTA meeting, then this delicious tale of payback is for you.

To stay up-to-date on new posts and take part in my not so deep thoughts click on this Facebook link – http://is.gd/iEgnJ (That’s the abbreviated link to my FB page) or I twitter @snarkynsuburbs.

6 thoughts on “The Real Housewives of Chuck E Cheese”